One of the most famous figures in psychology is the following: 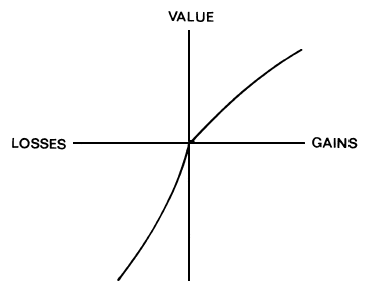 [If you can’t see the embedded figure, check it out here.]

Here’s how to understand the figure. On the X axis is objective gains and losses (for sake of simplicity, assume what we are gaining and losing is money). On the Y axis is subjective utility — how much you like the gain or dislike the loss.
The striking thing is that the line is not straight. The idea is that the difference between winning $5 and winning $15 is greater than the difference between winning $1005 and $1015. The same goes for losses — losing $5 is annoying, but losing an extra $5 on top of a loss of $1000 is just a drop in the bucket. This explains, among things, why people will spend an extra $5 on a car or a house but not on a stick of gum (a strange finding, when you think about it, since $5 is $5 either way).
These curves also predict something very interesting. Suppose you had a 50% chance of winning $10 and a 50% chance of winning nothing or you could take a guaranteed $5. Which would you do? Most people go with the guaranteed bet. This makes no sense according to probability theory, since your expected win is $5 either way, but it does when you look at the graph. The average subjective value of $10 and $0 is actually less than the subjective value of $5. Thus the best bet in terms of subjective value is the sure-thing $5.
With losses, you see something different. Suppose you had a 50% chance of losing $10 and a 50% chance of losing $0 or a guaranteed loss of $5. Most people would take their chances on the coin flip rather than going with the guaranteed loss. This again makes no sense if you look at the monetary values — it’s $5 on average either way. However, the average subjective pain of losing $10 and losing nothing is actually less than the subjective pain of losing $5. So the best bet in terms of the subjective value of the losses is to go with the coin flip.
This graph also shows that losses loom larger than gains, but I leave it to the reader to work this out for themselves. Altogether, these few squiggles pack in a lot of information.