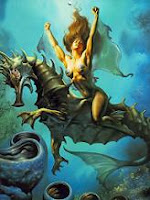 The nimble Hippocampus is suspect in its involvement with the evil legion of brain tissue infamously known as The Retrieval Network, relentlessly capturing Recent Memories. A wise oracle, The System-Level Consolidation Model, foretells the transformation of Recent Memories into Remote Memories and their eventual release from the inexorable grip of Hippocampus as they change hands to the sluggish yet more powerful Neocortical Circuitry during a dark and tortuous time known as the Period of Consolidation (if you haven’t gotten it yet, I’ve been attempting to maintain a consistent theme with the ridiculous title of this blog entry…funny what sleep deprivation and 20 odd years of dorkdum will do to a person).

All kidding aside, Takashima et al. at Radboud University Nijmegen of the Netherlands conducted a study testing the standard system-level consoldiation model’s hypothesis. They measured brain activity and connectivity during retrieval of face-location associations using an fMRI. Face-location associations were used for three reasons; features of this stimuli lead to distinct neocortical activity in the fusiform gyrus and posterior parietal cortex, binding of between-domain association involves the hippocampus, and a cued-recall paradigm elicits activation of the hippocampus. Two delays were used; 15 minutes and 24 hours including a whole night of sleep. Consistent with the their hypothesis and the standard model, results showed that posterior hippocampal activity associated with high-confidence retrieval decreased while neocortical activity increased with a 24 hour period of consolidation. Moreover, they found that connectivity between the hippocampus and neocortical regions decreased as cortical-cortical connectivity between the representational areas increased. This study supports a two-level process of the declarative memory system. The authors infer from the present and previous studies that the hippocampus is more likely suited for rapid encoding and retention of information by linking neocortical representations. However, the hippocampus seems to be an unlikely repository for long-term memory.

Sorry to break it to you Hippocampus, but the secret’s out…you aren’t as powerful as once thought to be ::end of anthropomorphism::.