Its not uncommon that we’re forced to work/put up with a disgruntled boss at one point or another. Not surprisingly, the relationship between an employee and their boss is the best predictor for job satisfaction according to a 2006 survey conducted by Accountemps, a Menlo Park, California-based specialized staffing service for temporary accounting, finance, and bookkeeping professionals. Moreover, the relationship you have with your boss may not only determine your overall job satisfaction, but also how well you sleep. 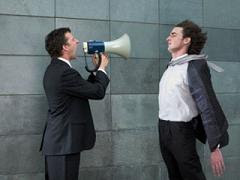 In a study by Niedhammer et. al published in the latest edition of SLEEP they investigated the association between a bullying boss and experienced sleep disturbance. Here is a snippet of their abstract:

Results: Workplace bullying was strongly associated with sleep disturbances. Past exposure to bullying also increased the risk for this outcome. The more frequent the exposure to bullying, the higher the risk of experiencing sleep disturbances. Observing someone else being bullied in the workplace was also associated with the outcome. Adjustment for covariates did not modify the results. Additional adjustment for self-reported health and depressive symptoms diminished the magnitude of the associations that remained significant.
Conclusions: The prevalence of workplace bullying (around 10%) was found to be high in this study as well was the impact of this major job-related stressor on sleep disturbances. Although no conclusion about causality could be drawn from this cross-sectional study, the findings suggest that the contribution of workplace bullying to the burden of sleep disturbances may be substantial.

This article ties in well with Levin and Nielsen’s prior work on emotions and disturbed sleep. In their 2007 Psychological Bulletin paper they proposed that high affect load, the consequence of daily variations in emotional pressure, and high affect distress, the disposition to experience events with distressing, significantly influenced nightmare prevalence, frequency, severity, and psychopathological comorbidity.