Prejudice…we’ve all experienced it at one point or another. Defined as a preconceived belief, opinion, or judgment toward a group or person because of race, social class, gender, ethnicity, sexual orientation, etc., it also means a priori beliefs that include any unreasonable attitude that is unusually resistant to rational influence. It’s been the cause of countless wars and an infinite amount of unnecessary suffering. It must be put to an end once and for all! So how do researchers go about investigating this dastardly illness nowadays anyway?

Cunningham, et. al (2004) used the Implicit Association Online Test (https://implicit.harvard.edu/) developed by Greenwald in 1998 to measures unconscious prejudice of certain groups. Subjects had to pair groups with “good” and “bad” labels and were given only a fraction of a second to respond; a mere gut reaction. From 1998 to now 2.5 million tests have been taken. Findings showed strongest prejudice against the elderly. There was less shame concerning bias against gays/lesbians and the obese.

Banaji, a colleague of Cunningham’s, showed in 2003 that when white students consciously recognized black faces brain areas involved with controlled thinking became active. Rational thought was triggered. Subjects were given the opportunity to challenge their implicit prejudice. She states “the imprint of culture is what we see in the subliminal exposure.

As the original developer of the Implicit Association Test, Greenwald et. al (2003) decided to take a further look at the prejudice happening all around us. He asked whether police officers, looking out for criminal activity, would lead to them focus more on black faces than white faces. He used a pseudo virtual reality experiment where subjects were asked to either fire at or not fire at simulated criminals (with guns), police officers (with guns), or citizens (with harmless objects). Findings showed that this indeed proved to be the case.

Dotsch and Wigboldus (2007) investigated how prejudiced implicit associations affected physiological and behavioral responses. Subjects were immersed in a virtual environment where they encountered either a White or Moroccan avatar. Results showed that subjects maintained further distance and showed increase in skin conductance levels (fear response) when approaching Moroccan avatars as opposed to White avatars.

Harris and Fiske (2007) looked at social groups that elicit disgust (e.g. homeless people, drug dealers) and found that they were processed differently in the medial prefrontal cortex (mPFC), a brain area crucial for social cognition. Lower activation of the mPFC could mean that these groups were being perceived as less than human. 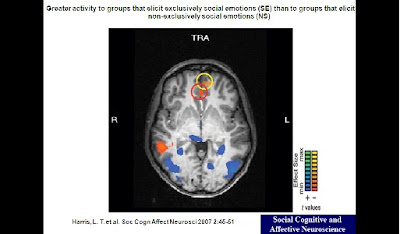 So if all these healthy people are responding in prejudice ways that seem almost automatic, could it mean that prejudice is innate, ingrained through years of evolutionary process? Read the full article at www.thequantumlobechronicles.blogspot.com