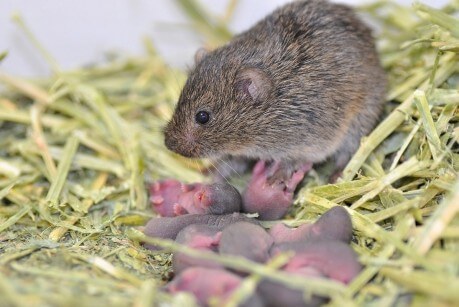 No matter how neglected the child, there’s still hope – at least for prairie voles.

That’s the message of a new study from a Cornell psychologist that could have implications for human health and well-being.

A lack of social interaction in early life made prairie voles worse at social tasks later on and changed brain structures related to those tasks, the study found. But social interactions in adolescence rescued the animal from these limitations. This is the first study of its kind to explore how social experiences at different developmental periods interact.

“We found there is potential for a bad outcome, in terms of basic cognitive behaviors and the developmental trajectory that these animals have. But one of the features that may have helped the prairie voles who were neglected early in life is a strong support subsequently, in adolescence or beyond,” said Alexander Ophir, assistant professor of psychology.

Tested in a maze, prairie voles that were raised without fathers and then housed alone were worse at recognizing which prairie voles they had met before and where they had met them, compared with animals that had had some social interaction, such as having been raised by both parents and/or housed in social groups. The neglected group also exhibited higher levels of oxytocin receptor, which can dampen the animals’ ability to recognize others, and changes to vasopressin receptors, which previous experiments have shown is related to affiliative behaviors. But when the neglected animals had more social interactions as adolescents, they were better able to recognize other prairie voles and their locations.

Ophir published his findings in a paper titled “Perinatal and Juvenile Social Environments Interact to Shape Cognitive Behavior and Neural Phenotype in Prairie Voles,” which appeared Nov. 25 in the Proceedings of the Royal Society B (Biological Sciences).

Like humans, prairie voles are one of the few mammals that form long-term pair bonds. And like humans, both male and female prairie voles care for their young, also a rarity among mammals. “We can learn a bit about ourselves by studying these animals and looking at those kinds of features in them,” Ophir said. “They are particularly important to understand in terms of why dads care for children and how that affects the offspring, both short term and long term.”

Also like humans, out in the real world prairie voles have to understand not just the location of their territory but where other males and other females are located in relation to that territory. “That’s a very social and spatial task,” Ophir said. “Knowing where everyone is means that you’re protecting your paternity, while boosting the chances of cheating on your partner,” Ophir said, which is beneficial for passing on one’s genes.

The study has implications for further work exploring how helpful social support in later life can be in humans, he said. “It really speaks to the strength and power of social support and how it can help throughout development.”

The study was funded by the National Institutes of Health and Cornell’s College of Arts and Sciences.