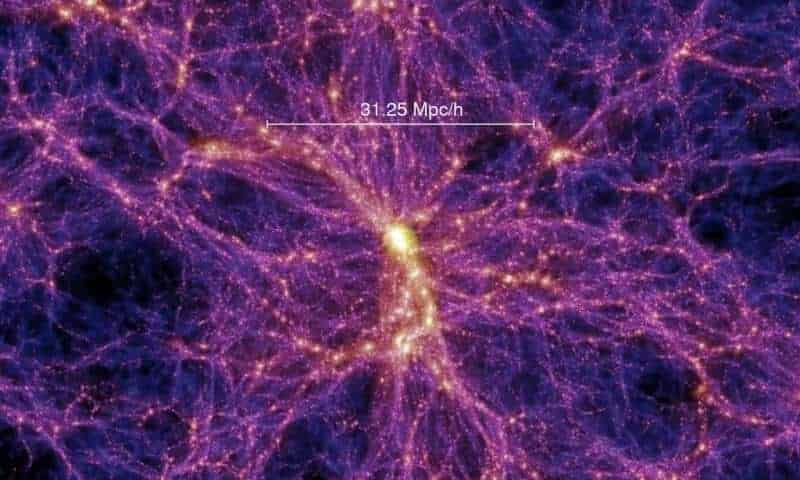 Matter known as ordinary, which makes up everything we know, corresponds to only 5% of the Universe. Approximately half of this percentage still eluded detection. Numerical simulations made it possible to predict that the rest of this ordinary matter should be located in the large-scale structures that form the “cosmic web” at temperatures between 100,000 and 10 million degrees. A team led by a researcher from the University of Geneva (UNIGE), Switzerland, observed this phenomenon directly. The research shows that the majority of the missing ordinary matter is found in the form of a very hot gas associated with intergalactic filaments. The article reporting this discovery is published in the journal Nature.

Galaxies are formed when ordinary matter collapses then cools down. In order to understand the origin of this formation, it was vital to discover in what form and where the ordinary matter that we do not perceive — known as the “missing baryons” — is found. To do this, the astrophysicists from UNIGE and the Ecole polytechnique fédérale de Lausanne (EPFL) took an interest in Abell 2744, a massive cluster of galaxies with a complex distribution of dark and luminous matter at its center. They observed this cluster with the XMM space telescope, which is capable of detecting the signature of very hot gas due to its sensitivity to X-rays.

Hot gas at the core of the filaments

Large-scale galaxy surveys have shown that the distribution of ordinary matter in the Universe is not homogeneous. Instead, under the action of gravity, matter is concentrated into filamentary structures, forming a network of knots and links called the “cosmic web.” The regions experiencing the highest gravitational force collapse and form the knots of the network, such as Abell 2744. Comparable to neural networks, these knots then connect to one another through filaments, wherein the researchers identified the presence of gas, and consequently, the missing baryons. The astrophysicists pointed XMM in the direction of the areas where they suspected to find the presence of filaments, and therefore, the presence of 10-million degree hot gas structures. For the first time, they were able to measure the temperature and density of these objects, and found that they corresponded to the predictions of the numerical models. For this reason, we now have a grasp of the form taken by the missing ordinary matter.

Will the amount of ordinary matter in the universe soon be known?

This research is a very significant validation of the models of galaxy formation in the Universe. “Now we must verify that the discovery of Abell 2744’s missing baryons is applicable to the entire universe. This will consist in studying these filamentary regions in detail, and measuring their temperature distribution and the various atoms that compose them, in order to understand how many heavy elements there are in the universe,” says Dominique Eckert, led scientist. In fact, if the researchers manage to measure the atoms in these filaments, they will be able to estimate the number of heavy nuclei formed by stars since the beginning of the universe. In order to deepen this research, the European Space Agency (ESA) is in the process of developing a new space telescope. Switzerland and the researchers from UNIGE are especially involved in this project. The telescope, named Athena, should be operational in the mid-2020s.