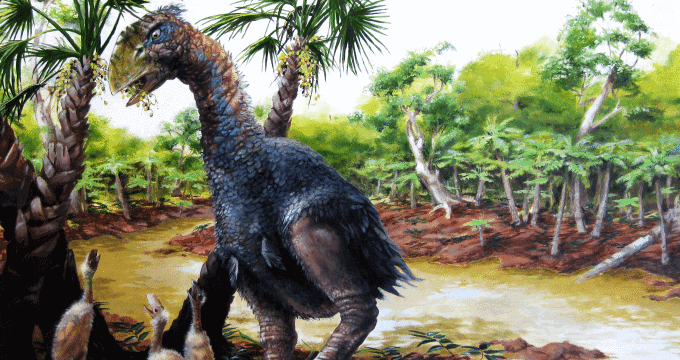 Strange as it may seem, a bird bigger than Big Bird once lived above the Arctic Circle.

The flightless bird, known as Gastornis, roamed Ellesmere Island next to Greenland about 50 million years ago, even during the twilight months of winter. Once thought to be a menacing predator, Gastornis — which weighed several hundred pounds — was more likely a vegan that munched on foliage, nuts, seeds and fruits.

In a new study, researchers described the first and only fossil evidence of Gastornis in the Arctic  — a toe bone picked up on Ellesmere Island by a science team in the 1970s. The new study is the first to scientifically describe the bone, says Professor Thomas Stidham of the Chinese Academy of Sciences, who undertook the research with CU-Boulder Associate Professor Jaelyn Eberle of the geological sciences department.

“We knew there were a few bird fossils from up there, but we also knew they were extremely rare,” says Eberle, also curator of paleontology at the University of Colorado Museum of Natural History. A paper by the two appeared in Scientific Reports.

The environment on Ellesmere Island 50 million years ago during the early Eocene Epoch was probably similar to cypress swamps in the southeast U.S. today. Fossil evidence indicates the Arctic island back then also hosted a menagerie of turtles, alligators, primates, tapirs and even large hippo-like and rhino-like mammals.

Today Ellesmere Island is one of the coldest, driest environments on Earth, where temperatures can drop to minus 40 degrees Fahrenheit in winter, says Eberle.

A second Ellesmere Island bird from the early Eocene also is described by Stidham and Eberle in the new study. Named Presbyornis, it was similar to birds in today’s duck, goose and swan family but with long, flamingo-like legs. Like Gastornis, Presbyornis has been mentioned occasionally in lists of Ellesmere Island fauna over the years. But the evidence — an upper wing bone — had never been described.

While the diversity of plants and animals on Ellesmere was surprisingly high in the early Eocene, one of the biggest challenges to life on the island may have been the Arctic winters, says Eberle. “Since Ellesmere Island is high above the Arctic Circle, the lights still went out there for several months of the year, just as they do today.”

Presbyornis may or may not lived in Arctic full time 50 million years ago. “There are some sea ducks today that spend the winter in the cold, freezing Arctic, and we see many more species of waterfowl that are only in the Arctic during the relatively warmer spring and summer months,” explains Stidham.

The new study has implications for the rapidly warming Arctic climate, primarily a result of greenhouse gases being pumped into Earth’s atmosphere by humans.

“Permanent Arctic ice, which has been around for millennia, is on track to disappear,” Eberle explains. “I’m not suggesting there will be a return of alligators and giant tortoises to Ellesmere Island any time soon. But what we know about past warm intervals in the Arctic can give us a much better idea about what to expect in terms of changing plant and animal populations there in the future.”