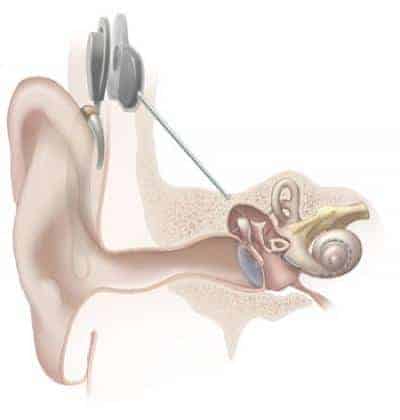 When hearing loss becomes so severe that hearing aids no longer help, a cochlear implant not only amplifies sounds but also lets people hear speech clearly.

Music is a different story.

“I’ve pretty much given up listening to music and being able to enjoy it,” says Prudence Garcia-Renart, a musician who gave up playing the piano a few years ago.

“I’ve had the implant for 15 years now and it has done so much for me. Before I got the implant, I was working but I could not use a phone, I needed somebody to take notes for me at meetings, and I couldn’t have conversations with more than one person. I can now use a phone, I recognize people’s voices, I go to films, but music is awful.”

Cochlear implants are designed to process speech, which is a much simpler auditory signal compared with music. People with severe hearing loss also have lost auditory neurons that transmit signals to the brain.

It’s not possible to tweak the settings of the implant to compensate for the loss of auditory neurons, says Anil Lalwani, MD, director of the Columbia Cochlear Implant Program. “It’s unrealistic to expect people with that kind of nerve loss to process the complexity of a symphony, even with an implant.”

Instead, Dr. Lalwani and members of Columbia’s Cochlear Implant Music Engineering Group is trying to reengineer and simplify music to be more enjoyable for listeners with cochlear implants. “You don’t necessarily need the entire piece to enjoy the music,” Dr. Lalwani says. “Even though a song may have very complex layers, you can sometimes just enjoy the vocals, or you can just enjoy the instruments.”

Right now the group is testing different arrangements of musical compositions to learn which parts of the music are most important for listener enjoyment. “It’s not the same for somebody who has normal hearing,” Dr. Lalwani says, “and that’s what we have to learn.”

Down the road, Dr. Lalwani thinks software will be able to take an original piece of music and reconfigure it for listeners or give the listener the ability to engineer their own music.

“Our eventual goal, though, is to compose music for people with cochlear implants based on what we’ve learned,” Dr. Lalwani says. “Original pieces of music that will possibly have less rhythmic instruments, less reverb, possibly more vocals—something that is actually designed for them.”

The study is titled, “Music Engineering as a Novel Strategy for Enhancing Music Enjoyment in the Cochlear Implant Recipient.” The other contributors are: Gavriel D. Kohlberg, Dean M. Mancuso, and Divya A. Chari.