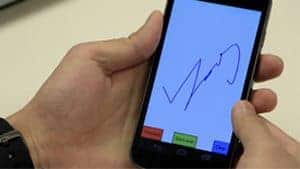 Someday soon, you may be able to log into your smartphone with sweeping gestures or doodling, using one or more fingers.

Rutgers University researchers have performed the first study of free-form gesture passwords for smartphones in the field. Free-form gesture passwords allow people to draw a password of any shape with any number of fingers, according to Janne Lindqvist, study coauthor and an assistant professor in the Department of Electrical and Computer Engineering in the School of Engineering and a member of WINLAB.

“Preventing people from hacking into your smartphone is a major issue, and it becomes even more important because people carry their smartphones everywhere,” Lindqvist said. “Getting access to somebody’s phone can give a lot of information about that person and make them vulnerable to lots of different kinds of attacks than can have  financial and other repercussions.”

The peer-reviewed Rutgers study will be formally published in May at the Association for Computing Machinery’s Conference on Human Factors in Computing Systems, also known as CHI 2016, in San Jose, California. CHI, an annual international event, is the premier conference on human-computer interaction.

Previous work by other researchers found that text passwords and PINs were hard to use, easy to compromise and unsuitable for mobile devices. Their shortcomings include limited password space, susceptibility to “shoulder surfing” and slow entry, according to Lindqvist.

Smartphones store a treasure trove of personal and sensitive data, such as emails and financial information. As people increasingly rely on smartphones, it is increasingly critical to keep those devices and the virtual accounts in them secure, according to Lindqvist.

“If you get access to a typical smartphone, that can reveal their whole social network,” said Lindqvist, coauthor of a recent study on Bitcoin, a controversial virtual currency. “People take photos with them. They might be just completely innocent photos of their family, but they might still not want them in the public. People do online banking with them.”

Yulong Yang, a doctoral candidate who developed the software for the study and is its lead student author, said “if you have access to others’ phones, you can pretend to be them and impersonate them.”

Last year, more than 70 percent of American adults owned a smartphone, up from 35 percent in 2011, according to the nonprofit Pew Research Center.

Smartphones are vulnerable to cyberattacks and cyber threats to mobile phones are on the rise, according to federal agencies.

The Rutgers study explored how 91 people used free-form gesture passwords in their daily lives. The researchers installed software on their Android smartphones and the participants created 347 text passwords and 345 gesture passwords. They completed 2,002 log-in tasks involving eight virtual accounts in their smartphones.

The results showed that the participants preferred shapes (49.28 percent) and letters (24.07 percent) for their gesture passwords versus lines (15.76 percent). Participants also preferred single-finger gestures (93.62 percent) over multi-finger ones.

Aside from Lindqvist and Yang, who worked on the study for about 18 months, coauthors include Gradeigh D. Clark, a Rutgers graduate student, and Antti Oulasvirta of Aalto University in Finland.

More information on the study and previous studies is available on this website: http://securegestures.org.