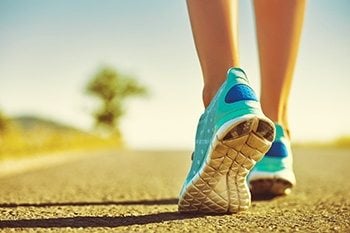 It’s common for employers to offer financial incentives to encourage employees to care more about their health. The healthier the workforce, the more productive the workplace will be.

But what’s most motivating to these employees? What can be offered to really change people’s bad habits? Three Penn researchers are working to find the answers.

In a study recently published in the journal Annals of Internal Medicine, Mitesh Patel, David Asch, andKevin Volpp, all professors at the Perelman School of Medicine and the Wharton School, and other colleagues found that financial incentives framed as a loss were more effective for achieving physical activity goals.

“It’s been shown in other contexts that people can be very motivated by losses,” Patel says. “But we’re just starting to apply it more in health care.”

The study challenged the 281 participants from Penn, all employees ages 18 years or older, to achieve at least 7,000 steps per day—a level of physical activity recommended to reach health benefits. Their progress was recorded using the accelerometers in their smartphones, which they each carried every day.

Participants had a Body Mass Index of at least 27, deeming them overweight.

“That gave us an indication that these particular people might be at higher risk,” Patel explains. “They might be more sedentary and might get more benefit from being physically active.”

The researchers tested the effectiveness of three different financial incentive designs on the participants for 13 weeks. The gain-incentive group received a fixed amount of money—$1.40—each day the step goal was achieved, which totaled $42 per month. The loss-incentive group had $1.40 taken away from a monthly incentive ($42 allocated up front) each time the daily goal was not met. There also was a daily lottery incentive that equaled about $42 per month.

Results showed that paying people $1.40 per day for being active produced basically the same outcome as the control group of people, who didn’t get paid at all. Both groups achieved the step goal 30 to 35 percent of the time. (The lottery produced a similar result to the control group, too.)

But when people received $42 up front and got it taken away if they didn’t meet their step goal, they actually achieved it 45 percent of the time.

This type of design is different from what’s been seen before, Patel says, when people have been asked to put their own money down, and have it taken away if they don’t meet their goal.

“What we find is that a lot of people are hesitant to put their own money down to participate because they are loss averse,” he says. “Giving an up-front incentive and taking it away, though, might be a way to engage a broader audience and still leverage loss aversion to motivate behavior change.”

Two earlier papers by Patel, Asch, and Volpp, published in the Journal of the American Medical Association, built the foundation for this particular study on framing financial incentives, Patel says. One talked about wearable devices as facilitators, not drivers, for health behavior change. The other study looked at the accuracy of 10 smartphone applications and wearable devices for tracking physical activity data.

“What was most surprising was that the smartphones, which 70 percent of Americans have and carry with them wherever they go, were just as accurate as wearable devices,” Patel says.

The researchers published another study in January, too, in Health Affairs, which proved how premium-based financial incentives aren’t the best means for promoting workplace weight loss.

“People want to be rewarded today as opposed to in the future,” Patel says. “Premium reductions often don’t work because the payments are hidden in employees’ payrolls. It’s not cash they get in the mail or a gift card.”

Next on their research plate is a series of studies that look at social incentives for weight loss and physical activity.

“We want our work to help employers and insurers design better workplace wellness programs going forward,” Patel says. “This will help give them evidence in how to better engage a lot of people, specifically the more sedentary people. They just have to be smart about it.”