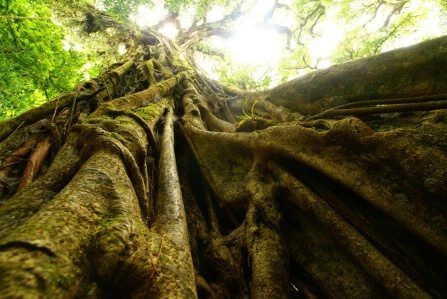 Much of our planet’s biodiversity is concentrated in hotspots, such as tropical mountains, where knowledge about the habitats and distributions of species remains too uncertain to guide management and conservation.

Scientists increasingly look to satellite remote sensing as a way to address this quandary, and a new study by University at Buffalo and Yale University scientists has now demonstrated the utility of an unconventional source of information: clouds.

The research, to be published on March 31 in PLOS Biology, examines 15 years of data from NASA’s Terra and Aqua satellites, which orbit and study the Earth.

The comprehensive observations enabled the scientists to build a database containing two images per day of cloud cover for nearly every square kilometer of the planet from 2000 to 2014.

While clouds might seem an odd thing to probe when it comes to mapping species, these sky-bound entities influence factors such as rain, sunlight, surface temperature and leaf wetness that dictate where plants and animals can survive.

The study found that variations in cloud cover sharply delineated the boundaries of ecological biomes, including tropical cloud forests that harbor many species not found anywhere else in the world.

“When we visualized the data, it was remarkable how clearly you could see many different biomes on Earth based on the frequency and timing of cloudy days over the past 15 years,” says lead scientist Adam Wilson, who conducted the majority of the research at Yale University and is now an assistant professor of geography in the UB College of Arts and Sciences. “As you cross from one ecosystem into another, those transitions show up very clearly, and the exciting thing is that these data allow you to directly observe those patterns at 1-kilometer resolution.”

By taking cloud patterns into account, the team was able to determine the size and location of habitats for the montane woodcreeper (a South American bird) and king protea (a South African shrub) in unprecedented detail.

That finding is particularly exciting because the technique could be used to research the habitats of threatened plants and animals, says co-author Walter Jetz, associate professor of ecology and evolutionary biology at Yale University.

“Understanding the spatial patterns of biodiversity is critical if we want to make informed decisions about how to protect species and manage biodiversity and its many functions into the future,” Jetz says. “But for the regions that harbor most biodiversity, there’s a real lack of data on the ground.”

“When it comes to conservation of threatened species, policies and regulations are in large part determined by our understanding of how big those populations are and where they are,” Wilson says. “We show that remote sensing combined with the right science can be an effective tool to help inform policy.”

Remote sensing as a powerful tool in defining habitats

The authors say the study demonstrates how remote sensing can be a powerful tool in monitoring ecosystems.

In the past, scientists interested in climate data had to rely on observations taken at weather stations scattered across the globe. This left large swathes of land unmonitored, which created serious limitations for research because many characteristics of ecosystems — such as temperature and rainfall — vary significantly across small regions.

Data from satellites enable researchers to conduct research without such gaps.

“That’s one of the really exciting developments in the field today,” Wilson says. “We now have decades of satellite observations that we can pull together to characterize the global environment. Our data are from two NASA satellites that have been up there in space, collecting two images per day everywhere on Earth for well over a decade. It is exciting to now be able to tap into this large stack of detailed data to support global biodiversity and ecosystem monitoring and conservation.”

The researchers created interactive maps at http://www.earthenv.org/cloud that allow anyone to pinpoint and compare changes in cloud cover patterns for any location.

Fine-grain spatio-temporal cloud dynamics visualized with a metric of seasonal concentration, which combines the magnitude and timing of monthly fluctuations in cloud frequency derived from 15 years of twice-daily satellite observations. It illustrates the often remarkably sharp transitions between many of the world’s terrestrial ecosystems. The hue indicates the month of peak cloudiness, while the saturation and value indicate the magnitude of the concentration ranging from 0 (black, all months are equally cloudy) to 100 (all clouds are observed in a single month). Coastlines shown in white, marine areas with no data are dark grey. Credit: Adam Wilson