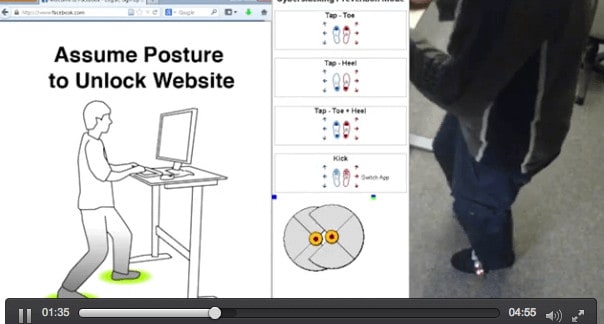 An innovative wearable technology for standing desks that creates a new way of interacting with your computer could reduce cyberslacking and increase healthy movement.

Researchers at the University of Waterloo’s David R. Cheriton School of Computer Science are hoping to make computing a bit more fun and physically active all while helping computer users kick cyberslacking habits by introducing a foot interaction method for computer users with a standing desk.

Professor Daniel Vogel presents Tap-Kick-Click: Foot Interaction for a Standing Desk at the Association for Computing Machinery’s Designing Interactive Systems 2016 in Brisbane, Australia today. The idea behind the research project, conducted with Master’s student William Saunders, is that computer users at standing desks can increase their physical activity through indirect, discrete two-foot input using combinations of kicks, foot taps, jumps, and standing postures which are tracked using a depth camera and instrumented shoes.

In addition to increasing physical activity while standing, these techniques use foot input as a cyberslacking deterrent by requiring the user to stand in a mildly uncomfortable position, such as a lunge, while viewing social networking websites or other distracting content. When the user changes from that position, the distracting content locks again.

“People already use a standing desk to be healthier and more productive. Increasing physical activity by using your feet to enter commands is our main focus, but the anti-cyberslacking pose is something that really pushes the whole idea farther,” said Vogel. “Some people already install software to completely block sites like Facebook when they want to get work done. Our technique lets people use those sites, but since they need to stand in an uncomfortable pose while viewing them, they’re naturally encouraged to keep it brief.”

The researchers demonstrate the Tap-Kick-Click technique with a web browser, document reader and a code debugger, but the system can be paired with almost any desktop applications. An on-screen guide helps the user remember and perform associated foot actions while taking a break from working with their hands.

“There’s plenty of research showing that using feet to type or move a cursor isn’t a very good idea. We demonstrate that with the right style of interaction, feet are a good fit for slower tasks with intermittent input. Things like scrolling a webpage while reading or interactive code debugging,” said Vogel. “We hope our system can make computing more physically active and maybe even a bit more fun.”