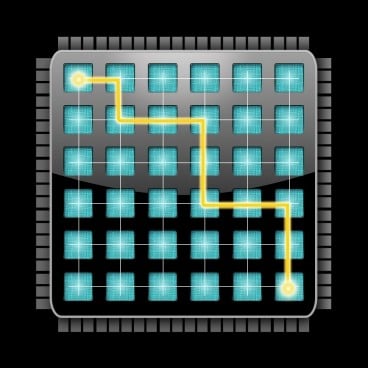 Virtually all electronics today rely on silicon computer chips, but this darling of the tech industry has drawbacks. Researchers at Oak Ridge National Laboratory may have found a pathway to a cheaper, lighter and more efficient replacement.

Today, silicon computer chips are produced through a complicated, multi-step process that utilizes extremely harsh chemicals to etch circuits onto chips. But that could change with the help of a device called the atomic-scale “sandblaster.” A team of Oak Ridge National Laboratory researchers led by Olga Ovchinnikova and Alex Belianinov recently demonstrated a new method to grow — rather than etch — nanostructures, such as those you’d find on computer chips, in materials other than silicon. The technique was applied to a layered material called bulk copper indium thiophosphate.

The Oak Ridge team works on 2-D materials, ultra-thin materials that are much lighter than much of what is currently used in electronics. “Our method opens pathways to direct-write and edit circuitry on 2-D material without the complicated current state-of-the-art multi-step processes,” Ovchinnikova said. While their “sandblaster” — actually a helium ion microscope — is typically used to cut and shape matter, this new technique could help establish a path to replace silicon as the choice for semiconductors in some applications.

“Everyone is looking for the next material — the thing that will replace silicon for transistors,” Belianinov said. “2-D devices stand out as having low power consumption and being easier and less expensive to fabricate without requiring harsh chemicals that are potentially harmful to the environment.” This makes the possibility of 2-D electronics not only desirable for industries and consumers, but better for the planet.

Reducing power consumption by using 2-D-based devices could be as significant as improving battery performance. “Imagine having a phone that you don’t have to recharge but once a month,” Ovchinnikova said. With 2-D materials, it would probably be a lot thinner, too.