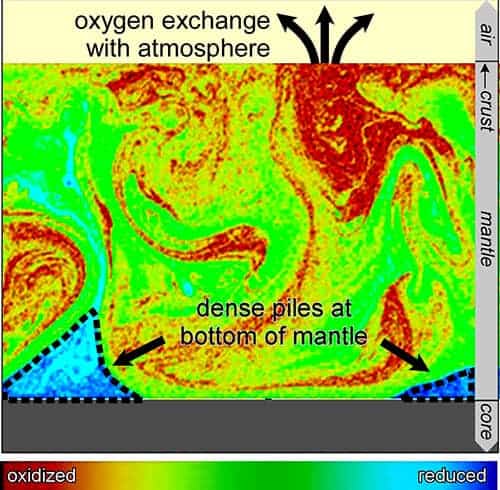 Oxygen buried deep underground in minerals may have prompted the churning of Earth’s rocky mantle billions of years ago and helped transform the planet’s early atmosphere, according to a new study.

Research by geoscientists at Yale, Arizona State University, and Bayerisches Geoinstitut in Germany suggests that convection in Earth’s mantle — the slow movement of rocks circulating beneath the surface, caused by heat from inside the Earth — is affected by the distribution of oxygen in those minerals. The findings appear online Aug. 1 in the journal Nature Geoscience.

“When there’s less oxygen present in the rock, it’s denser than when there is more oxygen present, even though the rest of the elements are the same. The more oxidized rock preferentially rises over the reduced rock,” said Kanani Lee, the study’s principal investigator and an associate professor of geology and geophysics at Yale.

This process had consequences both above and below the surface. Deep below the surface, the more oxygen-depleted rocks sank to the bottom of the rocky mantle, leading to the creation of massive, dense piles just above the Earth’s core such as those found deep beneath the Pacific and Atlantic oceans.

“This is the first time anyone has shown that the relative amount of oxygen deep in the Earth influences the minerals that rocks are made of and how it changes their densities,” Lee said.

Tingting Gu, a former Yale postdoctoral associate and the paper’s lead author, added, “The mantle is not entirely isolated from the surface. For example, gases from volcanic eruptions connect the mantle with the atmosphere. Our model predicts that early in Earth’s history, the shallow mantle was less oxidized and thus released gases such as methane that would consume oxygen produced by photosynthesis. But as time progressed and the less dense oxidized material rose in the mantle, biotic oxygen could be preserved and accumulate in the atmosphere. This process could be unique among the terrestrial planets because of their different compositions.”

The research was supported primarily by the National Science Foundation through a Career grant to Lee and through the Cooperative Institute for Dynamic Earth Research, which encourages multi-disciplinary cooperation in geoscience. The research combines mineral physics, geodynamics, seismology, and geochemistry.