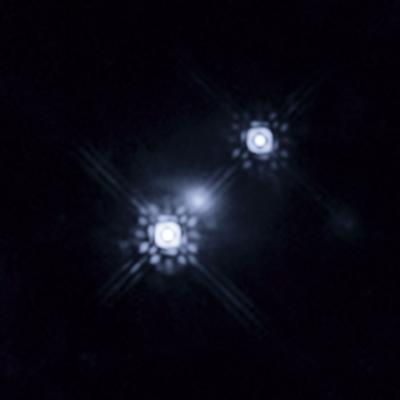 An international team of astronomers has used a new technique to study the bright disc of matter surrounding a faraway black hole. Using the NASA/ESA Hubble Space Telescope, combined with the gravitational lensing effect of stars in a distant galaxy [1], the team measured the disc’s size and studied the colours (and hence the temperatures) of different parts of the disc. These observations show a level of precision equivalent to spotting individual grains of sand on the surface of the Moon.

While black holes themselves are invisible, the forces they unleash cause some of the brightest phenomena in the Universe. Quasars — short for quasi-stellar objects — are glowing discs of matter that orbit supermassive black holes, heating up and emitting extremely bright radiation as they do so.

“A quasar accretion disc has a typical size of a few light-days, or around 100 billion kilometres across, but they lie billions of light-years away. This means their apparent size when viewed from Earth is so small that we will probably never have a telescope powerful enough to see their structure directly,” explains Jose Muñoz, the lead scientist in this study.

Until now, the minute apparent size of quasars has meant that most of our knowledge of their inner structure has been based on theoretical extrapolations, rather than direct observations.

The team therefore used an innovative method to study the quasar: using the stars in an intervening galaxy as a scanning microscope to probe features in the quasar’s disc that would otherwise be far too small to see. As these stars move across the light from the quasar, gravitational effects amplify the light from different parts of the quasar, giving detailed colour information for a line that crosses through the accretion disc.

The team observed a group of distant quasars that are gravitationally lensed by the chance alignment of other galaxies in the foreground, producing several images of the quasar.

They spotted subtle differences in colour between the images, and changes in colour over the time the observations were carried out. Part of these colour differences are caused by the properties of dust in the intervening galaxies: the light coming from each one of the lensed images has followed a different path through the galaxy, so that the various colours encapsulate information about the material within the galaxy. Measuring the way and extent to which the dust within the galaxies blocks light (known to astronomers as the extinction law) at such distances is itself an important result in the study.

By recording the variation in colour, the team were able to reconstruct the colour profile across the accretion disc. This is important because the temperature of an accretion disc increases the closer it is to the black hole, and the colours emitted by the hot matter get bluer the hotter they are. This allowed the team to measure the diameter of the disc of hot matter, and plot how hot it is at different distances from the centre.

They found that the disc is between four and eleven light-days across (approximately 100 to 300 billion kilometres). While this measurement shows large uncertainties, it is still a remarkably accurate measurement for a small object at such a great distance, and the method holds great potential for increased accuracy in the future.

“This result is very relevant because it implies we are now able to obtain observational data on the structure of these systems, rather than relying on theory alone,” says Muñoz. “Quasars’ physical properties are not yet well understood. This new ability to obtain observational measurements is therefore opening a new window to help understand the nature of these objects.”

[1] Gravity bends the structure of spacetime, and and hence deflects beams of light. When the alignment is right, with one object directly behind another, the foreground object’s gravity ‘bends’ the light like a lens, a process called gravitational lensing. Gravitational lenses typically produce multiple, distorted images of the distant object.

The most dramatic effects from gravitational lensing are the amplification and distortion of light from distant galaxies as it passes through massive galaxy clusters.

This effect also takes place on smaller scales, with galaxies at an intermediate distance lensing the light of distant quasars, producing multiple images of them that are visible through the lens galaxy.

Individual stars can also lens light, although this effect, called gravitational microlensing, is much more subtle and can only be detected by measuring how the lensing effect increases the source’s brightness.

This study makes use of gravitational microlensing by stars in a foreground galaxy to study the accretion disc of a quasar in the background. It also uses the interplay of quasar light and gravitational lensing to probe the gas and dust content of intermediate galaxies.