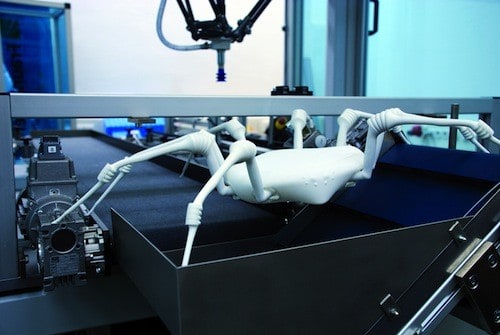 Spiders are very agile, and some can even jump. They owe this capability to their hydraulically operated limbs. Researchers have now designed a mobile robot modeled on the same principle that moves spider legs. Created using a 3-D printing process, this lightweight can explore terrain that is beyond human reach.

Enviably agile and purposeful, the mobile robot makes its way through grounds rendered off-limits to humans as the result of a chemical accident. Depressions, ruts and other obstacles are no match for this eight-legged high-tech journeyman. Its mission: with a camera and measurement equipment on board, it will provide emergency responders with an image of the situation on the ground, along with any data about poisonous substances. Not an easy task; after all, it must be prevented from tipping over. But this risk seems a minor one as it confidently and reliably picks its way through the area. As a real spider would, it keeps four legs on the ground at all times while the other four turn and ready themselves for the next step. Even in its appearance, this artificial articulate creature resembles an octopod. And no wonder – the natural specimen provided the model for researchers at the Fraunhofer Institute for Manufacturing Engineering and Automation IPA. This high-tech assistant is still a prototype, but future plans envision its use as an exploratory tool in environments that are too hazardous for humans, or too difficult to get to. After natural catastrophes and industrial or reactor accidents, or in fire department sorties, it can help responders, for instance by broadcasting live images or tracking down hazards or leaking gas.

With its long extremities, the spider has a range of ways to get around. Some models can even jump. This is possible using hydraulically operated bellows drives that serve as joints and keep limbs mobile. With no muscles to stretch their legs, these creatures build up high levels of body pressure that they then use to pump fluid into their limbs. Shooting fluid into the legs extends them. “We took this mobility principle and applied it to our bionic, computer-controlled lightweight robot. Its eight legs and body are also fitted with elastic drive bellows that operate pneumatically to bend and extend its artificial limbs,“ explains Dipl.-Ing. Ralf Becker, a scientist at IPA. The components required for locomotion, such as the control unit, valves and compressor pump, are located in the robot‘s body; the body can also carry various measuring devices and sensors, depending on the application at hand. Hinges interoperate with the bellows drives so that the legs can move forward and turn as needed. Diagonally opposed members move simultaneously, too. Bending the front pairs of legs pulls the robotic spider‘s body along, while stretching the rear extremities pushes it.

The special aspect of this high-tech helper: not only very light, it also combines rigid and elastic shapes in a single component; with just a few production steps, it can also be produced at low cost. To date, designs such as the mobile robot have been generated using conventional mechanical-engineering technologies – a time-consuming and costly undertaking. Researchers at IPA, on the other hand, rely on generative production technologies, and specifically on selective laser sintering (SLS) of plastics, a 3-D printing process. In this process, step by step thin layers of a fine polyamide powder are applied one at a time and melted in place with the aid of a laser beam. This way, complex geometries, inner structures and lightweight components can be produced – with structures optimized much as if produced by Nature herself. The experts at IPA have a great deal of latitude in the design of their mobile robot; the leg modules, for instance, can be designed with infinitely variable load-bearing characteristics.

“We can use SLS to produce one or even several legs in a single operation; this minimizes assembly effort, saves materials and reduces the time it takes to build a robot. With the modular approach, individual parts can be quickly swapped as well. Our robot is so cheap to produce that it can be discarded after being used just once – like a disposable rubber glove,“ Becker points out. A prototype of the robot can be seen at the EuroMold 2011 trade fair in Frankfurt, at the joint stand of the Fraunhofer-Gemeinschaft (Hall 11, Stand C66), from November 29 through December 2.