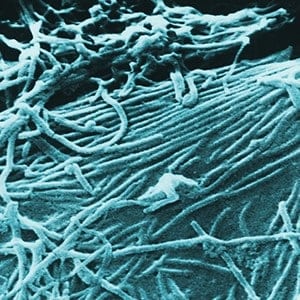 A study led by scientists at UMass Medical School demonstrates that an Ebola virus mutant dominated the 2013–16 epidemic by making the virus better able to infect human cells.

“This mutation is not just located in some random location of the viral genome,” said Jeremy Luban, MD, the David J. Freelander Professor in AIDS Research and professor of molecular medicine and biochemistry & molecular pharmacology. “Amazingly, it’s located precisely at the tip of the molecule that the Ebola virus uses as a key to unlock and gain entry to human cells.”

The research, published Nov. 3 in the journal Cell, reports findings from a collaborative project involving the labs of Dr. Luban; Kristian Andersen, PhD, of The Scripps Research Institute (TSRI) and Scripps Translational Science Institute (STSI); Pardis Sabeti, PhD, of the Broad Institute of MIT and Harvard; and Andrew Rambaut, PhD, of the University of Edinburgh.

The findings are a serendipitous discovery that sprang from Luban’s studies of HIV-1. Last year, Luban and colleagues reported the discovery that a human protein called SERINC5 inhibits HIV-1 (Nature 526:212), the virus that causes AIDS. William Diehl, PhD, a postdoctoral fellow at UMMS, wanted to know whether SERINC5 blocked viruses other than HIV-1. Though SERINC5 had no effect on Ebola virus, Dr. Diehl made an unexpected discovery: When compared with the ancestral Ebola virus glycoprotein that sparked the West African Ebola virus disease epidemic of 2013–16, Ebola virus glycoprotein mutants that appeared over the course of the epidemic were inherently better at entering human cells. One particular Ebola virus variant was more infectious then the others.

“We really wanted to know what was so special about this one particular mutant,” said Diehl.

Previous outbreaks of Ebola virus disease have stopped after a few hundred cases. The 2013–16 Ebola virus disease outbreak resulted in more than 28,000 cases with more than 11,000 deaths. The authors sorted through the large catalogue of Ebola virus genome sequences that had been isolated from victims of the epidemic. One particular mutation was found that arose early during the epidemic, before the number of cases began skyrocketing, and quickly dominated the epidemic. This mutation, GP-A82V, changes the glycoprotein that the Ebola virus uses to enter cells. Indeed, GP-A82V is precisely the mutation with increased infectivity that first attracted Diehl’s attention. The findings of Diehl, Luban and colleagues suggest that this Ebola virus mutation may have contributed to the unprecedented scale of the West African Ebola virus disease epidemic.

The authors extended their findings by demonstrating that GP-A82V increases the ability of the Ebola virus to enter cells from humans and other primates, but not cells of other mammals. A companion paper in the same issue of Cell, from Jonathan Ball, PhD, of the University of Nottingham, and colleagues, shows that GP-A82V even decreases the ability of Ebola virus to enter cells from fruit bats, the presumptive animal reservoir for Ebola virus. These observations suggest that GP-A82V is an adaptation that was selected for when the virus spilled over from bats to humans.

“Epidemiologists knew that the GP-A82V mutation had appeared early and that it rapidly dominated the epidemic,” said Luban. “But the GP-A82V is a subtle change that does not score in computer algorithms and, from the perspective of a molecular biologist, it seemed unlikely that it would have significant effects on the ability of the virus to infect people and cause disease.”

“There was this belief that Ebola virus essentially never changes,” said Dr. Andersen, a co-senior author of the study. “But this study tells us that a natural mutation in Ebola virus—which occurred during an outbreak—changed infectivity of human cells.”

The experiments reported in the two Cell papers were completed with isolated genes cloned from the Ebola virus; the effect of GP-A82V on fully infectious Ebola virus awaits confirmation in highly secure BSL4 laboratories. In additional experiments, the researchers are attempting to better understand how this mutation boosts the Ebola virus’ ability to enter human cells. One hypothesis is that the mutation changes the packing of amino acids in the receptor binding domain, such that the dynamic changes needed for the Ebola virus to fuse with the human cell are carried out more efficiently.