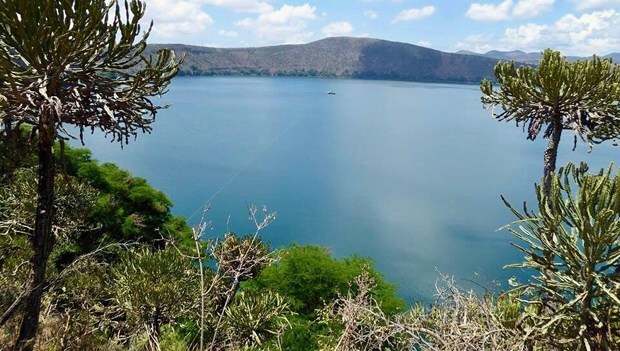 Researchers from all over the world gathered in November at a beautiful but unassuming volcanic lake in East Africa with the hope of uncovering its hidden record of the climate history so intimately involved in the development of our species. In collaboration with the International Continental Scientific Drilling Programme (ICDP), an international team of Earth scientists, including postdoctoral researcher Christian Wolff from the University of Hawaiʻi at Mānoa and the International Pacific Research Center (IPRC), deployed a floating drilling platform on Lake Challa to recover and analyze a complete core profile of its 210-meter thick sediment record.

East Africa is known as the cradle of humankind. The unusual geology and climatic conditions of East Africa created periods of highly variable local climate, which, it has been suggested, could have driven hominin evolution and migration out of Africa. Sediments on the bottom of Lake Challa, a 92-meter deep crater lake on the border of Kenya and Tanzania near Mt. Kilimanjaro, contain a uniquely long and continuous record of past environmental change in East Africa. The near-equatorial location and exceptional quality of this natural archive provide great opportunities to study tropical climate variability at both short (inter-annual to decadal) and long (glacial-interglacial) time scales, as well as the influence of this climate variability on the region’s freshwater resources, the functioning of terrestrial ecosystems and the history of the East African landscape in which modern humans (Homo sapiens) evolved and have lived ever since.

In support of this drilling project over the past several weeks, innumerable helicopter trips and countless porter traverses were required to carry drilling and scientific equipment (heavy tubing, drill mud, cables, hydraulics) into the crater and out to the barge on the lake. Physically carrying the equipment was made more challenging by the steep slopes of the crater and the absence of a decent pathway. The drilling itself took about three weeks and successfully yielded a continuous profile of the full, 215-m thickness of the lake’s sediments.

The principal scientific objective of the project is to extract from these sediments high-quality proxy data on climate change and landscape history over the past 250,000 years. This long time span, combined with the unusually superior time resolution from the finely-laminated sediments, promises to increase understanding of tropical climate and ecosystem dynamics greatly. Wolff, an IPRC climatologist and night-shift drill leader, hopes to use the data to improve reconstructions of the El Niño/Southern Oscillation phenomenon.

“The annual resolved record of sedimentation in Lake Challa provides important information on inter-annual climate variability, with weather extremes (El Niño and La Niña) occurring during a range of relatively warm and cool mean climate states in East Africa, over the past 250,000 years,” explained Wolff. “With this record, we can show exactly how often, when and how much the East African climate and landscape has changed throughout the entire existence of anatomically modern humans (~190,000 years).”

In addition, the data as a whole may also allow for improved predictions of future occurrences of extreme weather events such as droughts and floods, which impact heavily on East Africa’s water resources and economic activity. Beyond the immediate vicinity of East Africa, the Lake Challa results will also fundamentally help promote the development of better computer models for long-term prediction of global climate change.

“The sediment record of Lake Challa spans the timescale of two glacial-interglacial cycles of tropical rain dynamics over the western Indian Ocean,” said Axel Timmermann, UH Mānoa IPRC professor. “This timing will allow us to assess the relative impacts on the equatorial climate of differences in solar radiation at nearby, low latitudes compared with the more distant influence of high-latitude glaciation events.”