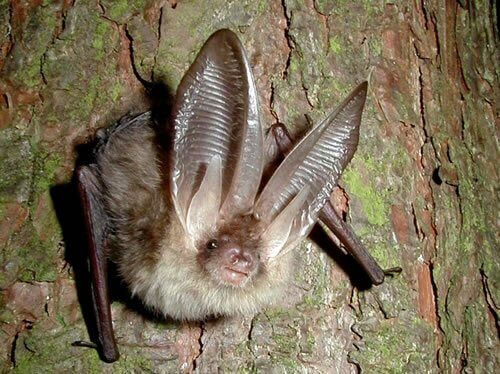 “Certain bats can deform the shapes of their ears in a way that changes the animal’s ultrasonic hearing pattern. Within just one-tenth of a second, these bats are able to change their outer ear shapes from one extreme configuration to another,” said Rolf Müller, associate professor of mechanical engineering at Virginia Tech.

Müller and his students wrote a paper on their work that is scheduled to appear this week in the Physical Review Letters, a prestigious peer-reviewed journal of the American Physical Society. The students are: Li Gao of Shandong, China, and a Ph.D. student with Müller and Sreenath Balakrishnan of Thrissur, Kerala and a master’s candidate with Virginia Tech’s Department of Mechanical Engineering as well as Weikai He and Zhen Yan both of Shandong, China in the School of Physics at Shandong University.

Müller explained the significance of their work, saying, “In about 100 milliseconds, this type of bat can alter his ear shape significantly in ways that would suit different acoustic sensing tasks.”

By comparison, “A human blink of an eye takes two to three times as long. As a result of these shape changes, the shape of the animals’ spatial hearing sensitivity also undergoes a qualitative change,” Müller added.

Bats are flying mammals most well known for their abilities to navigate and pursue their prey in complete darkness. By emitting ultrasonic pulses and listing to the returning echoes, the animals are able to obtain detailed information on their surroundings. Horseshoe bats, in particular, can use their sonar systems to maneuver swiftly through dense vegetation and identify insect prey under difficult conditions.

Acting as biosonar receiving antennas, the ears of bats perform a critical function in bringing about these ultrasonic sensing capabilities.

Using a combination of methods that included high-speed stereo vision and high-resolution tomography, the researchers from Virginia Tech and Shandong University have been able to reconstruct the 3-D geometries of the outer ears from live horseshoe bats as they deform in these short time intervals.

Using computer analysis of the deforming shapes, the researchers found that the ultrasonic hearing spotlights associated with the different ear configurations could suit different hearing tasks performed by the animals. Hence, the ear deformation in horseshoe bats could be a substrate for adapting the spatial hearing of the animals on a very short time scale.

The research piggybacks earlier work led by Müller and reported this spring in the Institute of Physics’ journal Bioinspiration and Biometrics. That study provided key insights into the various shapes of bat ears among the different species, and illustrated how the differences could affect how their navigation systems worked.

The National Natural Science Foundation of China, Shandong University, the Shandong Taishan Fund, and the China Scholarship Council supported the most recent work.

The collaboration between Shandong University and Virginia Tech started with Müller’s opening of a new international laboratory based at the Chinese facility in 2010. The new laboratory focuses on bio-inspired research. In the past, the lab was used by an interdisciplinary group of researchers from the University of Utah, North Carolina State University, and University of California Los Angeles to conduct experiments on the extraordinary capabilities of bats to generate high-powered ultrasonic pulses.

Müller says his aspiration in teaching is to bridge the gap between disciplines, especially between biology and engineering.

Müller’s research is focused on the understanding of how the most capable biological sensory systems can achieve their best performances. His recent achievements include: providing the first physical explanation for the role of a prominent flap seen in mammalian ears in 2004; discovery of a novel helical scan in the ear directivity of a bat in 2006; discovery of frequency-selective beam-forming by virtue of resonances in noseleaf furrows of a bat, an entirely new bioacoustic paradigm in 2006; establishing the first immediate and quantitative characterization of the spatial information created by a mammal’s outer ear in 2007; and now uncovering the acoustic effect of non-rigid ear deformations in bats.

Müller received the Friendship Award of the People’s Republic of China, considered China’s highest honor for “foreign experts who have made outstanding contributions to the country’s economic and social progress.” Also, he received a Top Ten Scholars Award from Shandong University in 2006, Tuebingen University’s 1999 Dissertation Award, and held a NATO Post-Doctoral Fellowship from 1998 until 2000.

He holds a patent on a method for frequency-driven generation of a multiresolution decomposition of the input to wave-based sensing arrays.

The College of Engineering at Virginia Tech is internationally recognized for its excellence in 14 engineering disciplines and computer science. The college’s 6,000 undergraduates benefit from an innovative curriculum that provides a “hands-on, minds-on” approach to engineering education, complementing classroom instruction with two unique design-and-build facilities and a strong Cooperative Education Program. With more than 50 research centers and numerous laboratories, the college offers its 2,000 graduate students opportunities in advanced fields of study such as biomedical engineering, state-of-the-art microelectronics, and nanotechnology. Virginia Tech, the most comprehensive university in Virginia, is dedicated to quality, innovation, and results to the commonwealth, the nation, and the world.