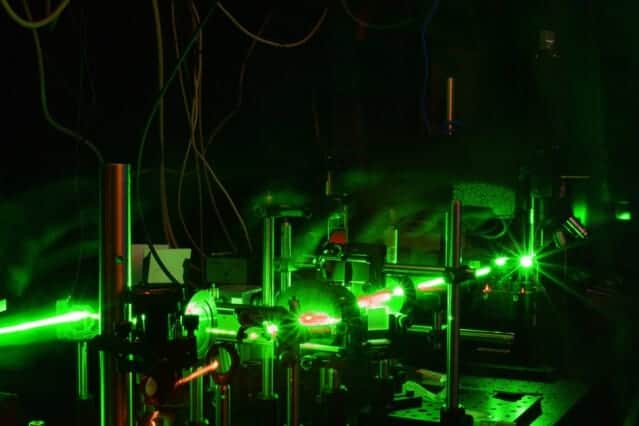 Materials exposed to a high-radiation environment such as the inside of a nuclear reactor vessel can gradually degrade and weaken. But to determine exactly how much damage these materials suffer generally requires removing a sample and testing it in specialized facilities, a process that can take weeks.

An analytical method developed by researchers in the Department of Chemistry at MIT and applied by members of MIT’s Mesoscale Nuclear Materials Laboratory could change that, potentially allowing for continuous monitoring of these materials without the need to remove them from their radiation environment. This could greatly speed up the testing process and reduce the preventive replacement of materials that are in fact safe and usable.

The findings are being reported this week in the journal Physical Review B, in a paper by graduate student Cody Dennett, assistant professor of nuclear science and engineering Michael Short, and six others.

When it comes to measuring radiation damage in materials, Short says, “most of the current ways are slow and expensive.” For example, the method considered to be the gold standard for such testing, transmission electron microscopy (TEM), produces comprehensive data on many of the defects in the material that are responsible for changes in its properties. But not all the defects that affect the material’s properties can be seen in the TEM, so the test does not provide complete data.

“We’re not just interested in how many voids or vacancies you have,” Short says, referring to places where one or more atoms are missing from the material’s crystal lattice. “What we really want to know is how the material properties are changing.”

The team found the answer in a technique called transient grating spectroscopy. Essentially, this is a way of measuring the thermal and elastic properties of materials by inducing and monitoring acoustic waves on the material’s surface. Though the system only “sees” the outer surface of the materials, those acoustic vibrations are affected by subsurface defects in the material’s structure. The effect is similar to the way geologists can construct a picture of Earth’s interior layers by studying the way seismic waves propagate in different directions.

The system creates these acoustic oscillations by using two pulsed laser beams aimed at the sample in such a way that the light waves of the two beams cause an interference pattern. This interference pattern causes heating at the sample surface, generating a standing acoustic wave. The motion of the surface caused by this wave can be monitored by another set of lasers. “We create rippling acoustic waves,” Short says, “and measure how fast they move and how quickly they decay,” without physically contacting the material in any way.

The team’s work initially faced some skepticism. “People said ‘how do you know [this technique] is sensitive enough?’” Short says. But with careful experiments that “almost perfectly” matched theoretical simulations, they proved the necessary sensitivity, he says. “Those critical questions were important for us to hear, and motivated us to conduct this study.”

For one test, the team compared two batches of aluminum samples that were composed of perfect single crystals with different surface orientations. Though the internal atomic arrangement was different, “they looked identical to the eye or in the microscope,” he says. “We put them all in our device, and we were able to sort them all out.”

To follow up on their initial work, the researchers are now working to prove their technique’s sensitivity to tiny defects in a material’s structure. “We’re creating simple defects and then measuring the signals, to predict the impact,” Short says. “We want to show how sensitive we can get.”

The team used different materials in their tests but focused mostly on single-crystal aluminum. They chose that material because it was one of the most challenging, Short explains. “As you rotate the sample, its acoustic response changes” because of the different alignment of the crystal structure to the laser-induced surface acoustic waves. “But it changes very little. So if we can sense those subtle changes in wave speed in aluminum, then we’re well-prepared to measure radiation effects” in other materials. The results of those tests showed that their device is sensitive enough to detect changes in acoustic wave speed as small as one-tenth of 1 percent. And it can provide its answers “in seconds, versus months or years” for existing methods.

The method the researchers developed to directly simulate transient grating spectroscopy is as important as the measurements themselves, they say. Using careful molecular dynamics simulations, the researchers were able to accurately predict the expected response of copper and aluminum, and confirm this prediction with measurements. “The most powerful implication for these simulations,” Short says, “is that we can create new structures in the computer and predict their signals. Some defects are too complex for us to predict their signals using theory alone. That is where simulation comes in.” The ability to use simulation to explain experimental measurements on the atomic scale is also “extremely enlightening,” he says.

“Now, we can take a data point about every five minutes, where usually you would get a few data points per month,” he says. That speedier testing could be crucial in enabling the development of new generations of cladding material for nuclear fuel for advanced new reactors, he says. “Now, the biggest drawback to deploying new reactors is materials, and the biggest drawback to that is testing. If we can go from months to seconds, we can get around that bottleneck.”

Although their initial tests were done with larger laboratory setups, Short says it should be quite straightforward to reproduce those functions in a small, portable device that could be carried around for field tests or permanently mounted in strategic monitoring points within a reactor vessel.

“This is a great piece of work with a nice combination of experimental and modeling work,” says Felix Hoffman, an associate professor of engineering science at Oxford University in the U.K., who was not involved in this work.

“Transient Grating (TG) methods provide a great new alternative to traditional techniques of measuring radiation damage as they are rapid, nondestructive, and don’t require much in the way of sample preparation other than a polished surface,” he says. “This is in stark contrast to TEM, atom probe, or micromechanics that require long sample preparation. … If the system can be miniaturized and made sufficiently portable to allow in situ measurements, this would open up tremendous possibilities for probing material property evolution due to irradiation.”

“The authors have demonstrated a significant and versatile advance in monitoring and quantifying point defects in mesoscale volumes,” says Steven Zinkle, chair of the department of nuclear engineering at the University of Tennessee, who also was not involved in this work. “With further refinement,” he says, “the newly developed TG spectroscopy technique could lead to improved understanding of real-time defect evolutions that occur in a wide range of pure materials and engineering alloys during exposure to ion beam processing or neutron bombardment during energy production in nuclear reactors.”

The research team also included Penghui Cao, an MIT postdoc; Sara Ferry, an MIT graduate student; Alejandro Vega-Flick of the CINVESTAV Unidad Merida in Mexico; Alexei Maznev, a research scientist in MIT’s Department of Chemistry; Keith Nelson, the Haslam and Dewey Professor of Chemistry at MIT; and Arthur Every at the University of Witwatersrand in South Africa. The work was supported by the National Science Foundation, Transatomic Power, Inc., and the U.S. Nuclear Regulatory Commission.