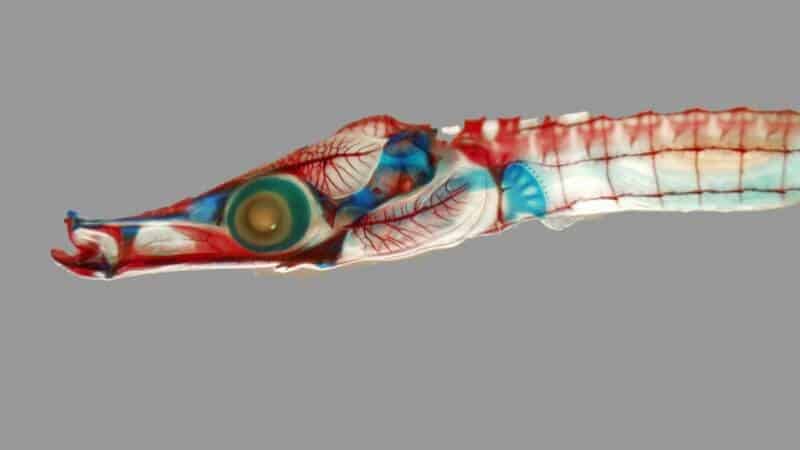 UO biologists have produced a detailed genome of the snakelike gulf pipefish, delivering a new tool to explore an ancient fish family that includes seahorses and sea dragons and which through genetic changes has generated bodies with vastly different features.

Comparing the genome with other vertebrate organisms may help scientists learn about basic aspects of human biology, such as how skulls develop and change shape and how the genome that people mostly share with other vertebrates can be tweaked to create new structures, said Susan Bassham, a senior research associate in the lab of UO biologist Bill Cresko where the research was done.

While such research connected to human features is an added benefit, a more immediate payoff is that the methods used during the project are laid out so that other small labs can use them as a reference for creating genomes of organisms they are interested in studying.

A paper detailing the genome was published Dec. 20 by the journal Genome Biology. The gulf pipefish — abundant in seagrass beds of the Gulf of Mexico — has the species name of Syngnathus scovelli. It belongs to the family known as Syngnathidae, which dates back at least 50 million years.

“This group of species has novelties that are not well understood from an evolutionary genetic standpoint,” said Clay Small, one of the paper’s lead authors and a postdoctoral fellow in Cresko’s lab in the Institute of Ecology and Evolution. “The family Syngnathidae is a very good model for studying these derived structural features because they are so weird looking in terms of their unique body plans. Ultimately, we are interested in identifying genetic changes that are related to the evolution of these novel features in this whole family.”

Species in the Syngnathid family have long snouts, which help their suction-like feeding behavior. They have bony body armor. They lack pelvic fins, ribs and teeth and have evolved unique placentalike structures in males for the brooding of developing offspring.

The publication of the gulf pipefish genome came less than a week after the genome of another family member, the tiger tail seahorse, was announced in the journal Nature.

“Having this pair of papers published almost simultaneously moved genomic analyses of this remarkable group of fish ahead tremendously,” said Cresko, a professor of biology.

The two genomes show that losses and changes in specific genes or gene functions may be responsible for evolutionary innovations, Small said. Through evolution, the pipefish and seahorse genomes have lost genetic elements compared to distant fish ancestors. These likely explain some changes in body alignment and the loss of pelvic fins, which correspond to legs in the human vertebrate lineage, he said.

A big part of Small’s efforts focused on the ability of male pipefish to gestate embryos in their brood pouch. The gulf pipefish, Bassham said, provides an example of one of the most elaborated placental structures found in the males of various pipefish species.

Some 1,000 genes are expressed differently in the pouch during a male’s pregnancy to control developmental processes, nutrient exchange, stability and immunity, the researchers reported.

In a comparative analysis between pregnant and nonpregnant male pipefish, Small found a family of genes that behaved unusually. This gene family, patristacins, contains some members that turn on during pregnancy and others that are suppressed during pregnancy. The group of genes is likely unique to Syngnathid fishes, and they behave similarly in seahorses.

The UO-led team also found that gulf pipefish have two chromosomes fewer than most ray-finned fish. “By looking at the patterns of where genes lie in the genome, it’s very likely this difference resulted simply from the fusion of four of the ancestral chromosomes into two,” Bassham said. “Most fish have 24 chromosomes, but the gulf pipefish has 22.”

The researchers used a genome sequencer in the UO’s Genomics Core Facility, along with a genetics technology developed at the UO called restriction-site associated DNA markers, now known as RAD-sequencing. It allows researchers to sort data and then organize it all back together into a detailed genetic map.

The team also used three software packages developed by co-author Julian Catchen, a former UO postdoctoral researcher now at the University of Illinois at Urbana-Champaign. The software was designed to complement RAD-sequencing and genome assembly data.

“Fish are vertebrates. We are vertebrates,” she said. “We share large swaths of our biology with these fish. We’d like to understand how evolution occurs, and some of the most exciting aspects of evolution happen when novel features appear in an evolutionary lineage.

“Novelties can happen multiple ways,” Bassham said. “Sometimes it involves a loss of a structure that creates a new way of life. In other cases, it might be an evolution of a new body part that wasn’t there before. Where did that tissue come from? How did it come into being? What was modified to make it? Or what developmental gene pathways were changed to allow for it?”

The National Institutes of Health and National Science Foundation supported the research.

A more-detailed look at the science unveiled by the gulf pipefish genome paper can be seen in a blog posted by BioMed Central.