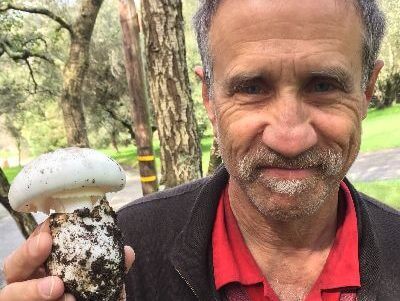 So when Mitchell (Kresge ’79, biology and psychology) got a call on Jan. 2, 2007, that six extremely sick members of a Watsonville family were in Dominican Hospital after accidentally consuming poisonous Amanita phalloides (also known as death cap) mushrooms, he went looking for answers.

Googling amanita poisoning, Mitchell found references to doctors in Europe who had successfully treated poisoning victims with an intravenous extract of milk thistle seeds manufactured by a small pharmaceutical company in Germany. The problem was, the drug, called silibinin, was not approved for use in the United States by the federal Food and Drug Administration (FDA).

Knowing his patients’ livers were failing and that a liver transplant or death were real possibilities, Mitchell got on the phone. He spent hours hitting roadblock after roadblock but finally convinced the FDA to give him one-time permission to use the milk thistle extract, and a courier was soon on a plane to California with the drugs.

A few days later, everyone in the family but the 83-year-old grandmother recovered. It was an experience that would change Mitchell’s life.

Not only would the 59-year-old family practice doctor head a clinical trial on the use of silibinin for amanita poisoning in the United States, but also some 100 people would be treated using what has come to be known as the Santa Cruz Protocol and he would be called on to lecture on the topic around the world.

Sitting at a café table at Staff of Life market in Santa Cruz, Mitchell says his natural pushiness and his penchant for “having one foot out of the mainstream,” was part of the reason he was able to save all but one of the family.

“It was,” he says with a smile, “the one time where my essential nature served me well.”

Mitchell grew up in Chicago and Florida and came to UC Santa Cruz as a rebellious, long-haired 18-year-old who liked the campus’s tradition of independent thinking and creative problem solving.

It was at UC Santa Cruz that, inspired by working with scientists like the late Charles Daniels, a professor emeritus of biology, and Frank Talamontes, a professor of molecular, cellular and developmental biology, Mitchell decided to go into medicine.  He was working as a hospitalist at Dominican Hospital and treating mostly indigent patients when the family arrived.

Since then, Mitchell, who is now the resident physician at Mount Madonna Center near Watsonville, has been called upon to consult on mushroom poisoning cases throughout the U.S. And, while he says he can’t reveal exact statistics, nearly every patient in his clinical trial recovered after being treated with silibinin.

He hopes to publish a paper on the results soon.

Mitchell recently returned from presenting at poison control conferences in Singapore and in China, a country, he says, “that is without a doubt the most highly impacted place in the world for amanita toxin poisoning, where literally hundreds of people die each year.”

In California, there were 679 cases of wild mushroom poisoning from November 2015 to October 2016, according to the state Department of Public Health. Three people suffered liver failure leading to coma and/or a liver transplant and 50 suffered severe dehydration and damage to their liver or kidney.

For Mitchell, that’s enough reason to have devoted nearly a decade of his life to getting FDA approval for silibinin, despite the fact he’s a family practice doctor and not a research physician, and doesn’t have a big pharmaceutical company behind him. Instead, he says, the study is overseen by Dignity Health, which operates Dominican Hospital and 38 other acute-care facilities in three states.

For him, the chance to permanently change the way amanita poisoning is treated in the U.S. and around the world “is the greatest gift medicine could give back to me.”