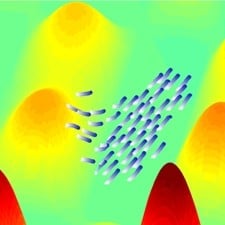 Much to humans’ chagrin, bacteria have superior survival skills. Their decision-making processes and collective behaviors allow them to thrive and even spread efficiently in difficult environments.

Now researchers at Tel Aviv University have developed a computational model that better explains how bacteria move in a swarm — and this model can be applied to man-made technologies, including computers, artificial intelligence, and robotics. Ph.D. student Adi Shklarsh — with her supervisor Prof. Eshel Ben-Jacob of TAU’s Sackler School of Physics and Astronomy, Gil Ariel from Bar Ilan University and Elad Schneidman from the Weizmann Institute of Science — has discovered how bacteria collectively gather information about their environment and find an optimal path to growth, even in the most complex terrains.

Studying the principles of bacteria navigation will allow researchers to design a new generation of smart robots that can form intelligent swarms, aid in the development of medical micro-robots used to diagnose or distribute medications in the body, or “de-code” systems used in social networks and throughout the Internet to gather information on consumer behaviors. The research was recently published in PLoS Computational Biology.

A dash of bacterial self-confidence

Bacteria aren’t the only organisms that travel in swarms, says Shklarsh. Fish, bees, and birds also exhibit collective navigation. But as simple organisms with less sophisticated receptors, bacteria are not as well-equipped to deal with large amounts of information or “noise” in the complex environments they navigate, such as human tissue. The assumption has been, she says, that bacteria would be at a disadvantage compared to other swarming organisms.

But in a surprising discovery, the researchers found that computationally, bacteria actually have superior survival tactics, finding “food” and avoiding harm more easily than swarms such as amoeba or fish. Their secret? A liberal amount of self-confidence.

Many animal swarms, Shklarsh explains, can be harmed by “erroneous positive feedback,” a common side effect of navigating complex terrains. This occurs when a subgroup of the swarm, based on wrong information, leads the entire group in the wrong direction. But bacteria communicate differently, through molecular, chemical and mechanical means, and can avoid this pitfall.

Based on confidence in their own information and decisions, “bacteria can adjust their interactions with their peers,” Prof. Ben-Jacob says. “When an individual bacterium finds a more beneficial path, it pays less attention to the signals from the other cells. But at other times, upon encountering challenging paths, the individual cell will increase its interaction with the other cells and learn from its peers. Since each of the cells adopts the same strategy, the group as a whole is able to find an optimal trajectory in an extremely complex terrain.”

In the computer model developed by the TAU researchers, bacteria decreased their peers’ influence while navigating in a beneficial direction, but listened to each other when they sensed they were failing. This is not only a superior way to operate, but a simple one as well. Such a model shows how a swarm can perform optimally with only simple computational abilities and short term memory, says Shklarsh, It’s also a principle that can be used to design new and more efficient technologies.

Robots are often required to navigate complex environments, such as terrains in space, deep in the sea, or the online world, and communicate their findings among themselves. Currently, this is based on complex algorithms and data structures that use a great deal of computer resources. Understanding the secrets of bacteria swarms, Shklarsh concludes, can provide crucial hints towards the design of new generation robots that are programmed to perform adjustable interactions without taking up a great amount of data or memory.