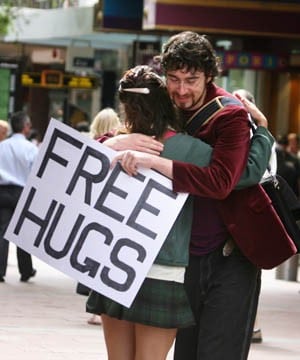 Do you consider yourself a kind, compassionate person? And how would a stranger judge your kindness quotient? Having a certain genetic variant might provide the answer to both those questions, according to a recent University of Toronto Mississauga study.

“Ours is the first study to show that a slight genetic variation can predict how a person is going to act and how a complete stranger is going to judge them,” said lead authorAleksandr Kogan, a psychology post-doctoral researcher at U of T Mississauga. He stressed, however, that having or not having the gene is not the final word in understanding kindness. “Our findings are one piece of the puzzle of a much broader picture that predicts kindness.”

Research has shown that high levels of oxytocin, a naturally occurring neuropeptide in the body, increase prosocial feelings such as trust, empathy, kindness and generosity. Kogan, post-doctoral mentor Emily Impett of U of T Mississauga, and colleagues examined variations of the oxytocin receptor gene to determine if these genetic variations could predict how kind and compassionate complete strangers judged a person to be, all from just a 20-second video clip.

In their study, they showed 116 students (observers) short silent video clips — in the video clips, subjects listened to their romantic partners disclose an experience of personal suffering. These clips were completely silent, giving the observers only a glimpse of behavioral information on which to base their judgments. After seeing the video clips, the observers then rated each subject for trustworthiness, compassion and kindness.

“Generally, people can be surprisingly accurate in their judgment of another person’s socio-economic status, personality traits, and even whether they are lying-all from just a few seconds of behavior,” Kogan said. “In our research, we wanted to find out whether people’s genetic differences could predict how kind strangers would judge them to be, and if so, what might be the intermediary step that makes this possible.”

However, Kogan cautioned that understanding a person’s disposition towards kindness is extremely complex. Gene variation is a contributing, but not the only, factor.

“Complex traits like kindness and cooperation are extremely unlikely to be regulated by a single gene, and so there are likely many other genes in play. There are also many non-genetic factors that have a tremendous influence on how kind people are. All these different forces-genetic and non-genetic-come together in an extremely complex web to shape human kindness and compassion.”

He also noted that his team studied only Caucasians to avoid potential cultural and ethnic biasing of results. The results cannot be extrapolated to other ethnic groups because genotype distribution varies greatly by ethnicity.