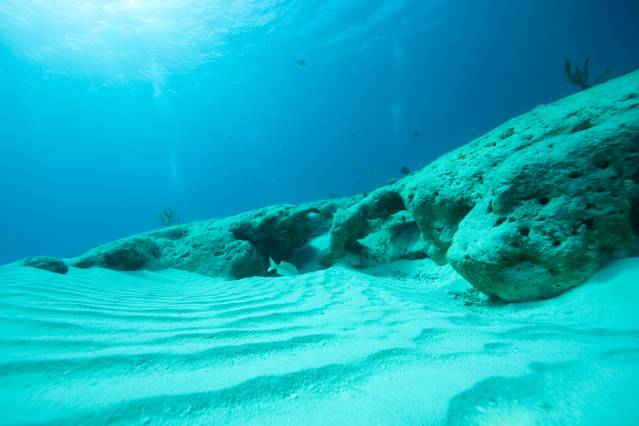 Two University of Rhode Island researchers have created the first computer model of a deep-sea bacterium, providing insight into how marine organisms have adapted to survive in low-temperature and high-pressure environments.

Ying Zhang, URI assistant professor of molecular biology, and doctoral student Keith Dufault-Thompson of Lincoln, created the model of Shewanella piezotolerans WP3, often called WP3, a bacterial species found on the sea floor in the western Pacific Ocean. Their research was published last month by the American Society for Microbiology in the journal mSystems.

Zhang said their research aims to make sense of the biochemical pathways and networks found in every genome. “These networks represent the utilization of nutrients, and due to their complexity, they often look like a big ‘hairball’ of connected dots. We want to understand how the ‘hairball’ evolves and how it relates to the activities of different organisms,” she said.

In the case of WP3, the model created by Zhang and Dufault-Thompson simulates the metabolic activities of the bacterium.

“A lot of research has been conducted on related species that are found in lake water or in the upper ocean, but the more cold-adapted and pressure-adapted species has been harder to study, harder to grow in the laboratory,” explained Dufault-Thompson, the first author on the study. “By starting with a model and combining it with future experimental work, we can start to see the differences in the two groups.”

Their findings so far – which were verified by laboratory studies at Shanghai Jiao Tong University in China – have been somewhat surprising.

“One very cool feature of Shewanella species is that they can live without oxygen,” said Zhang. “Instead, they can breathe metals, including uranium, and other organic and inorganic materials.”

The researchers demonstrated through modeling, however, that the organism’s anaerobic breathing is not used for producing energy like in other organisms.

“Although they do breathe, their use of the pathway is atypical compared to other known species that breathe in anaerobic conditions,” Zhang said. They believe this process is an ancient feature that evolved in the early ancestors of Shewanella.

Based on their computer simulations, Zhang and Dufault-Thompson also found that WP3 has multiple ways of producing the energy it needs to grow. “We found that it has a little more flexibility in how much and how it’s producing energy compared to other species,” said Dufault-Thompson. “That might give it a little edge to grow well in the more harsh environment of the deep ocean.”

The researchers say these discoveries emphasize how little is known about the creatures living deep in the oceans, some of which may be beneficial to humans.

“The deep sea is a very unexplored environment. We simply don’t know much about biodiversity there,” said Zhang. “There are so many potential resources out there for genes that could be explored in biotechnology. The metabolic diversity of Shewenella could make it useful in degrading uranium or other organic wastes in the environment.”

“There are also environmental implications from what we’re learning about how different organisms adapt to temperature,” added Dufault-Thompson. “Because ocean temperatures are changing, it’s useful to understand how differences in metabolism could affect different species.”

The next step in their research is to verify other findings predicted by the model.

“We want to investigate more about where Shewenella comes from, what makes them so versatile, and what has shaped their metabolic pathways,” Zhang said.