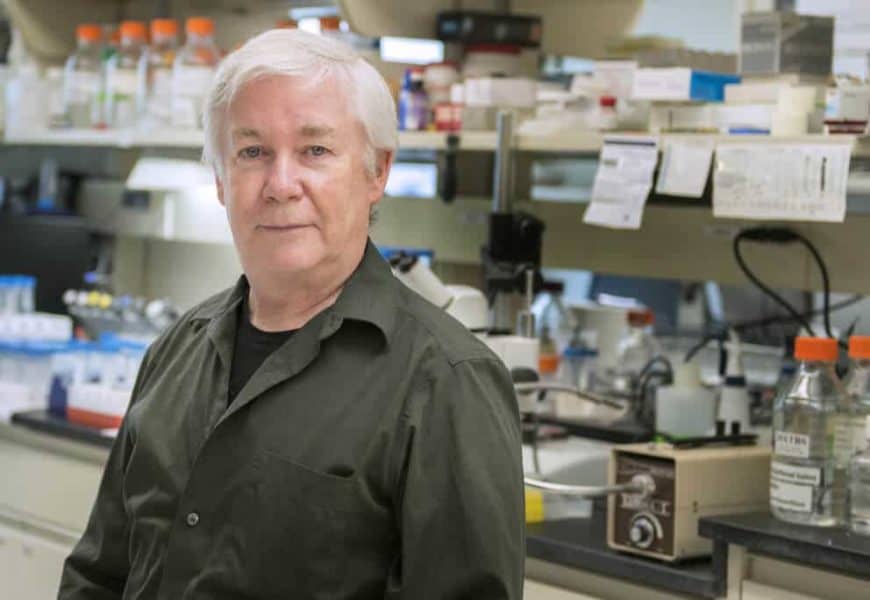 Daniel Cosgrove is a professor of biology in Penn State's Eberly College of Science. His research focuses on how cell expansion plays a key role in the shaping and size of plants.

Plant cell wall growth is typically described as a simple process, but researchers using a microscope that can resolve images on the nanoscale level have observed something more complex.

A close-up look at the growth of plant cell walls, which largely determines the way a plant grows and takes shape, offers a better understanding of how the tough-but-flexible walls expand, researchers have found in a recent study.

The researchers, who report their findings in the current issue of Nature Plants, used an atomic force microscope, which allowed them to take high-resolution images at the nanometer level. This enabled them to watch microfibrils — hair-like fibers made of cellulose that help form the cell walls — and how they responded when researchers stretched the walls in ways that mimic the strains of growth in natural conditions.

“With the help of the atomic force microscope, we can see for the first time the conformation of cellulose microfibrils under hydrated conditions, and how these microfibrils move under different stretching regimes,” said Daniel Cosgrove, professor of biology, who also holds the Eberly Chair in Biology at Penn State. “What we saw was a very different pattern of motion than what happens when you loosen the cell wall in a way that mimics plant cell growth. The growth of the cell wall is not simply playing by the rules of normal cell wall mechanics, but in fact there’s another element there — cell wall loosening — that is changing the mechanical behavior of the cell wall into something different.”

Plant growth is guided by how the cell walls grow, according to Cosgrove. Microfibrils and a combination of other types of polysaccharides — or sugar polymers — slowly fill in the plant cell wall and separate from each other, increasing the walls’ surface size.

“Plant cell-wall growth is the underlying mechanism by which really small seedlings can grow to really large trees,” said Cosgrove. “It’s the cellular basis for the way leaves expand — and that’s important for photosynthesis — so that everything that we eat, is directly or indirectly dependent on this process.”

In the past, researchers only used bulk measurements to test the elasticity of cell walls.

“If you just measure elastic properties, then you’ll get an incomplete picture of the ability of that cell wall to grow and the pattern by which it grows,” said Cosgrove, who worked with Tian Zhang, postdoctoral scholar in biology and Daniel M. Durachko, research assistant in biology, both of Penn State and Dimitrios Vavylonis, professor of physics, Lehigh University.

The researchers also said that microfibrils were once seen as passive reinforcing elements in the material that makes up the cell wall and that they simply underwent passive realignment as the wall grew, said Cosgrove. However, under the microscope, the microfibrils revealed more complex movements, he added.

Technology — as in the microscope, and also a device that can pull on the cell wall, in this case, the cell wall of an onion plant — was critical in making these observations, according to Cosgrove.

“We’ve never before seen microfibril motions at the nanoscale level,” he said. “And that’s key to understanding what’s happening molecularly in the cell wall.”

The researchers removed a 30 mm long and 5 mm wide strip from the outer layer of a white onion and placed it under the atomic-force microscope. To simulate wall stress and strain, the strips were mounted to a device that could stretch the skin. The microscope took time-lapsed photographs during the stretching process.

The U.S. Department of Energy, the Center for LignoCellulose Structure and Formation and the Huck Institutes of the Life Sciences supported this work.