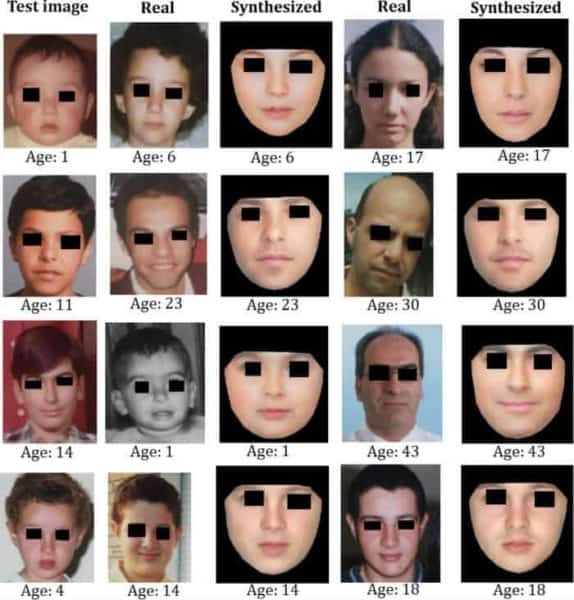 Researchers at the University of Bradford have developed a method of ageing facial images that could enhance the search for long-term missing people worldwide.

The method maps out the key features, such as the shape of the cheek, mouth and forehead, of a face at a certain age. This information is fed to a computer algorithm which then synthesises new features for the face to produce photographic quality images of the face at different ages.

A key feature of the method is that it teaches the machine how humans age by feeding the algorithm facial feature data from a large database of individuals at various ages. Consequently, the method improves on existing techniques, achieving greater level of accuracy.

The findings will be presented at the International Conference on Missing Children and Adults at Abertay University, Dundee in June, and have been published in the Journal of Forensic Sciences.

Professor Hassan Ugail, of Bradford’s Centre for Visual Computing, is leading the research. He said: “Each year around 300,000 missing person cases are recorded in the UK alone. This has been part of our motivation in endeavouring to improve current techniques of searching for missing people, particularly those who have been missing for some considerable time.”

The technique developed by the team uses a method of predictive modelling and applies it to age progression.  The model is further strengthened by incorporating facial data from a large database of individuals at different ages thus teaching the machine how humans actually age. In order to test their results the researchers use a method called de-aging whereby they take an individual’s picture and run their algorithm backwards to de-age that person to a younger age. The result is then compared with an actual photograph of the individual taken at the young age.

As a test case, the researchers chose to work on the case of Ben Needham. Ben disappeared on the Greek island of Kos on 24th July 1991, when he was only 21 months old. He has never been found, but several images have been produced by investigators showing how Ben might look at ages 11-14 years, 17-20 years, and 20-22 years. The team used their method to progress the image of Ben Needham to the ages of 6, 14 and 22 years. The resulting images show very different results, which the researchers believe more closely resemble what Ben might look like today.

An effective method needs to do two things: the synthesized images need to fit the intended age; and they need to retain the identity of the subject in age-progressed images. The results were evaluated using both machine and human methods, and in both, the images of Ben produced using this method were found to be more like the original picture of Ben than the images created as part of previous investigations.

Professor Ugail added: “No criticism is implied of existing age progression work. Instead we are presenting our work as a development and improvement that could make a contribution to this important area of police work. We are currently working with the relevant parties to further test our method. We are also developing further research plans in order to develop this method so it can be incorporated as a biometric feature, in face recognition systems, for example.”