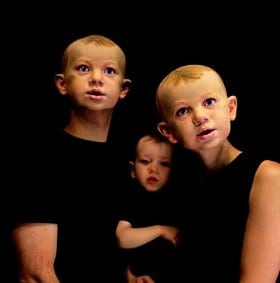 Whether comparing a man and a woman or a parent and a baby, we can still see when two people of different age or sex are genetically related. How do we know that people are part of a family? Findings from a new study published in the Journal of Vision increases our understanding of the brain’s ability to see through these underlying variations in facial structure.

“Being able to see the family resemblance between faces that have some underlying difference, such as the difference between male and female faces, is an ability that is not well understood and merits further investigation to work out how visual information about faces is organized,” says author Harry J. Griffin, PhD, of the Department of Cognitive, Perceptual and Brain Sciences at University College London.

As described in the paper, (Relative faces: Encoding of family resemblance relative to gender means in face space), researchers conducted two experiments using original and synthesized cross-gender “sibling” faces that resemble each other and “anti-sibling” faces that have the opposite characteristics of the original face.

“This pattern of results shows that when we see a face, we compare it to an average face for that gender, allowing us to pick out only the face cues that tell us about family membership while disregarding the irrelevant gender cues,” explains Griffin.

In the second experiment, using the visual adaptation method of biasing an observer’s perception of objects through prolonged exposure, participants were shown a male anti-sibling generated from a female face. The results indicate that adapting to the male face clearly influenced the perceived identity of a subsequent identity-ambiguous female face. According to the researchers, this implies that the cues underlying family resemblance for both male and female faces are processed within the same brain space.

“We used this simple, non-invasive method to show that the facial appearance of men and women are processed by overlapping populations of brain cells,” says Griffin. “This takes our understanding beyond the conceptual and gives a picture of how the brain actually works.”

The research team hopes their findings will prompt other researchers to investigate the perception of similarity in other aspects of facial appearance such as underlying differences in age or racial groups. They s also suggest the results may have an impact on the computer science industry.

“Understanding how we encode faces can inform computer scientists who are building face recognition systems for security applications and computer graphics teams building synthetic faces for applications in the film and gaming industry and to enhance human computer interaction,” added computer scientist and team member Peter McOwan from Queen Mary, University of London.

1 thought on “How we see family resemblance in faces”