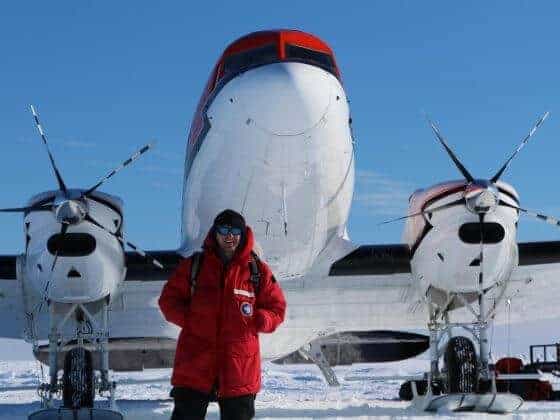 Even as Montana State University scientists gear up for another epic expedition in Antarctica, they continue to publish new findings from their last one. In their latest paper, they reveal the discovery of a large supply of methane and the surprising way that nature keeps it from entering the atmosphere.

In 2013, a U.S. team of scientists drilled half a mile through the West Antarctic Ice Sheet to explore one of Earth’s final frontiers — a subglacial lake that has been covered by ice for hundreds of thousands of years.

Regents Professor John Priscu was chief scientist for that project, called WISSARD, an acronym for Whillans Ice Stream Subglacial Access Research Drilling. Other MSU participants — professors, graduate students and former postdoctoral researchers — still remember the intensity of that experience. They describe the exhilaration they felt when they held their first samples and proved that Subglacial Lake Whillans contained life and an active ecosystem.

Now, in the July 31 issue of the journal Nature Geoscience, the scientists have published another major paper describing new discoveries from WISSARD.

The paper, “Microbial oxidation as a methane sink beneath the West Antarctic Ice Sheet,” reveals that sediments from a lake beneath the West Antarctic Ice Sheet contain large amounts of methane. Unlike swamps where fermentation produces methane, the methane beneath the ice sheet is formed through the reaction of carbon dioxide and hydrogen gas, both of which can be supplied to the sub-ice environment. This process is carried out by one-celled organisms within the Archaea. Archaea forms one of three domains of life, the others being Bacteria and Eukarya.

The subglacial methane could have been made five years ago or millions of years ago, but the authors say that will remain unknown until deeper sediment samples are obtained from the region.

The research also offers comfort to readers who might worry that melting ice will release the methane into the atmosphere and add to the warming of the planet. The MSU team discovered that bacteria in the upper layers of the subglacial lake sediments consume the methane before it can escape into the atmosphere. Importantly, Priscu said, the methane provides energy and carbon to these methane-eating bacteria allowing them to grow in what would otherwise appear to be an inhospitable environment.

“Methane is a really good energy source in Subglacial Lake Whillans,” Michaud said. ”While it is beneficial to humans that the microbes consume methane, it is important to also understand that this might be a significant way of life for microbes that live in a dark and permanently cold biosphere beneath the West Antarctic Ice Sheet.”

Michaud and colleagues wrote in the paper that “methane is an important greenhouse gas that affects atmospheric chemistry and the radiative balance of Earth. Consequently, understanding its global sources, sinks and feedbacks within the climate system is of considerable importance.”

Priscu said Michaud’s paper and another Antarctic-related paper to be published this summer in the journal Nature Ecology and Evolution, present “transformative scientific results about the continent.” He added that “Antarctica holds 70 percent of our planet’s freshwater and is a sentinel for climate change. The results we report in these seminal manuscripts provide more pieces of the puzzle on how the Earth system is responding to climate forcing.”

The Nature Geoscience paper was Michaud’s fourth as first author and was based on Michaud’s dissertation work at MSU. A native of Eagan, Minnesota, Michaud received his doctorate in ecology and environmental science in MSU’s Department of Land Resources and Environmental Sciences in 2016. He is now a postdoctoral researcher at Aarhus University in Denmark.

“I think Alex deserves this,” Priscu said of the journal publication. “He’s very inquisitive and determined. If he can’t figure something out, he will go and try to figure it out on his own. He has a lot of energy. He’s a hard worker. He’s a good-natured individual. He’s dedicated. He doesn’t take no for an answer.”

“I can’t stress this enough,” Priscu said. “No one had ever drilled through 800 meters of ice before, ever. They put a lot of faith in me and the project, the National Science Foundation, and others to make this happen.”

Michaud’s seven co-authors include Priscu and John Dore, both faculty members in the Department of Land Resources and Environmental Sciences in MSU’s College of Agriculture. Mark Skidmore is a glacial geochemist in the Department of Earth Sciences in MSU’s College of Letters and Science. Brent Christner, a former postdoctoral researcher with Priscu and Skidmore, now works at Louisiana State University at Baton Rouge and the University of Florida at Gainesville. Amanda Achberger is one of Christner’s graduate students. Trista Vick-Majors, one of Priscu’s former graduate students, is now a postdoctoral fellow at the University of Quebec in Montreal. Andrew Mitchell, a former postdoctoral researcher in MSU’s Center for Biofilm Engineering in the College of Engineering is now at Aberystwyth University in the United Kingdom.

“We had a really good microbiology group,” Michaud said. “I learned a lot from all of them, especially John.”

Priscu said the reason MSU is involved in so many cutting-edge papers about Antarctica is because MSU pioneered a new field of science — the study of life in ice and beneath polar ice sheets.

“We had the original vision,” Priscu said. “It started here at MSU.”

Priscu has worked in Antarctica for more than three decades and will leave in November for his 34th season in the world’s southernmost continent. He also conducts research on methane in lakes along the north slope of Alaska, glaciers in Greenland, lakes and glaciers in Tibet near Mount Everest and the Karakorum region of China, near the Pakistan border.

During the upcoming season in Antarctica, Priscu will focus on two projects. One is an NSF-funded Long Term Ecological Research project, or LTER, in the McMurdo Dry Valleys. That study, now in its 25th year, examines how this polar desert ecosystem, the largest relatively ice-free area in Antarctica, responds to climate change. It is a cold desert region on the west coast of McMurdo Sound that is highly susceptible to climate change.

The second project is another massive effort to drill down to another subglacial Antarctic lake, this one being Subglacial Lake Mercer. As chief scientist for the Subglacial Antarctic Lakes Scientific Access (SALSA) project, Priscu organized an interdisciplinary team consisting of geomicrobiologists, geochemists, geophysicists, and paleo-sedimentologists from eight U.S. institutions along with three international collaborators to directly sample this lake. Priscu said Antarctica has more than 400 subglacial lakes, but scientists have only directly sampled Lake Whillans so far. Lake Mercer is deeper and bigger than Lake Whillans and will provide new information on biodiversity and geochemistry beneath the ice sheet, and provide a novel data set to determine the stability of the West Antarctic Ice Sheet. The two are approximately 100 miles apart.

The overarching goal of SALSA and WISSARD is to broaden the understanding of subglacial life and answer questions about life on this and other planets, Priscu said. The new three-year $5.2 million project is funded by the National Science Foundation and builds on the $10 million WISSARD project.

“The Antarctic Subglacial environment is a dynamic ecosystem where life, ice, water and rock form a web of complex interactions,” Priscu said. “To better understand this subglacial biome, SALSA will employ an integrated approach of scientific discovery that samples from three geobiological systems. Through combining results across multiple disciplines, we will learn new information about our planet’s past and gain knowledge on subglacial processes such as carbon cycling and water-ice dynamics.”

WISSARD was a great success and Priscu is enthusiastic about its ongoing discoveries, he said. At the same time, he said, he is concerned about the future of polar research. He is afraid that Antarctic research may be in peril.

“One of my biggest concerns is that funding cuts will reduce our investment in Antarctic graduate education,” Priscu said. ”If proposed funding cuts prevail, we will be unable to educate the next generation of polar researchers. It will be these young scientists, like Michaud, who will take us into a critical period where large portions of the Antarctic Ice Sheet may soon end up in the ocean, leading to many meters of sea level rise.”