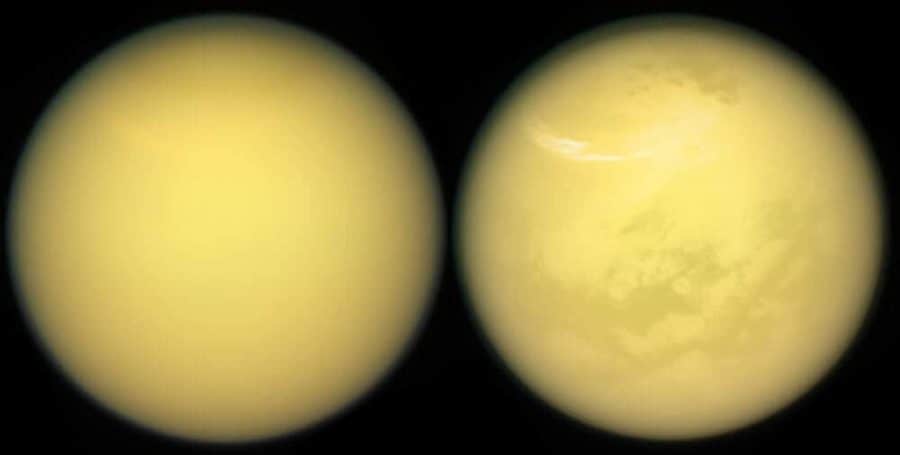 Mere weeks away from its dramatic, mission-ending plunge into Saturn, NASA’s Cassini spacecraft has a hectic schedule, orbiting the planet every week in its Grand Finale. On a few orbits, Saturn’s largest moon, Titan, has been near enough to tweak Cassini’s orbit, causing the spacecraft to approach Saturn a bit closer or a bit farther away. A couple of those distant passes even pushed Cassini into the inner fringes of Saturn’s rings.

Titan will be waiting once again when the road runs out in September. A last, distant encounter with the moon on Sept. 11 will usher Cassini to its fate, with the spacecraft sending back precious science data until it loses contact with Earth.

But this gravitational pushing and shoving isn’t a new behavior for Titan. It’s been doing that all along, by design.

The True Engine of the Mission

Repeated flybys of Titan were envisioned, from the mission’s beginning, as a way to explore the mysterious planet-size moon and to fling Cassini toward its adventures in the Saturn system. Scientists had been eager for a return to Titan since NASA’s Voyager 1 spacecraft flew past in 1980 and was unable to see through the dense, golden haze that shrouds its surface.

Titan is just a bit larger than the planet Mercury. Given its size, the moon has significant gravity, which is used for bending Cassini’s course as it orbits Saturn. A single close flyby of Titan could provide more of a change in velocity than the entire 90-minute engine burn the spacecraft needed to slow down and be captured by Saturn’s gravity upon its arrival in 2004.

The mission’s tour designers — engineers tasked with plotting the spacecraft’s course, years in advance — used Titan as their linchpin. Frequent passes by the moon provided the equivalent of huge amounts of rocket propellant. Using Titan, Cassini’s orbit could be stretched out, farther from Saturn — for example, to send the spacecraft toward the distant moon Iapetus. With this technique, engineers used Titan flybys to change the orientation of Cassini’s orbit many times during the mission; for example, lifting the spacecraft out of the plane of the rings to view them from high above, along with high northern and southern latitudes on Saturn and its moons.

Over the course of its 13-year mission at Saturn, Cassini has made 127 close flybys of Titan, with many more-distant observations. Cassini also dropped off the European Space Agency’s Huygens probe, which descended through Titan’s atmosphere to land on the surface in January 2005.

Successes for Cassini during its mission include the revelation that, as researchers had theorized, there were indeed bodies of open liquid hydrocarbons on Titan’s surface. Surprisingly, it turned out Titan’s lakes and seas are confined to the poles, with almost all of the liquid being at northern latitudes in the present epoch. Cassini found that most of Titan has no lakes, with vast stretches of linear dunes closer to the equator similar to those in places like Namibia on Earth. The spacecraft observed giant hydrocarbon clouds hovering over Titan’s poles and bright, feathery ones that drifted across the landscape, dropping methane rain that darkened the surface. There were also indications of an ocean of water beneath the moon’s icy surface.

Early on, Cassini’s picture of Titan was spotty, but every encounter built upon the previous one. Over the course of the entire mission, Cassini’s radar investigation imaged approximately 67 percent of Titan’s surface, using the spacecraft’s large, saucer-shaped antenna to bounce signals off the moon’s surface. Views from Cassini’s imaging cameras, infrared spectrometer, and radar slowly and methodically added details, building up a more complete, high-resolution picture of Titan.

“Now that we’ve completed Cassini’s investigation of Titan, we have enough detail to really see what Titan is like as a world, globally,” said Steve Wall, deputy lead of Cassini’s radar team at NASA’s Jet Propulsion Laboratory in Pasadena, California.

Scientists now have enough data to understand the distribution of Titan’s surface features (like mountains, dunes and seas) and the behavior of its atmosphere over time, and they have been able to begin piecing together how surface liquids might migrate from pole to pole.

Among the things that remain uncertain is exactly how the methane in Titan’s atmosphere is being replenished, since it’s broken down over time by sunlight. Scientists see some evidence of volcanism, with methane-laden water as the “lava,” but a definitive detection remains elusive.

Cassini’s long-term observations could still provide clues. Researchers have been watching for summer rain clouds to appear at the north pole, as their models predicted. Cassini observed rain clouds at the south pole in southern summer in 2004. But so far, clouds at high northern latitudes have been sparse.

“The atmosphere seems to have more inertia than most models have assumed. Basically, it takes longer than we thought for the weather to change with the seasons,” said Elizabeth Turtle, a Cassini imaging team associate at Johns Hopkins Applied Physics Laboratory, Laurel, Maryland.

The sluggish arrival of northern summer clouds may match better with models that predict a global reservoir of methane, Turtle said. “There isn’t a global reservoir at the surface, so if one exists in the subsurface that would be a major revelation about Titan.” This points to the value of Cassini’s long-term monitoring of Titan’s atmosphere, she said, as the monitoring provides data that can be used to test models and ideas.

Results from the Last Close Pass

Cassini made its last close flyby of Titan on April 22. That flyby gave the spacecraft the push it needed to leap over Saturn’s rings and begin its final series of orbits, which pass between the rings and the planet.

During that flyby, Cassini’s radar was in the driver’s seat — its observation requirements determining how the spacecraft would be oriented as it passed low over the surface one last time at an altitude of 608 miles (979 kilometers). One of the priorities was to have one last look for the mysterious features the team dubbed “magic islands,” which had appeared and then vanished in separate observations taken years apart. On the final pass there were no magic islands to be seen. The radar team is still working to understand what the features might have been, with leading candidates being bubbles or waves.

Most interesting to the radar team was a set of observations that was both the first and last of its kind, in which the instrument was used to sound the depths of several of the small lakes that dot Titan’s north polar region. Going forward, the researchers will be working to tease out information from these data about the lakes’ composition, in terms of methane versus ethane.

As Cassini zoomed past on its last close brush with Titan, headed toward its Grand Finale, the radar imaged a long swath of the surface that included terrain seen on the very first Titan flyby in 2004. “It’s pretty remarkable that we ended up close to where we started,” said Wall. “The difference is how richly our understanding has grown, and how the questions we’re asking about Titan have evolved.”