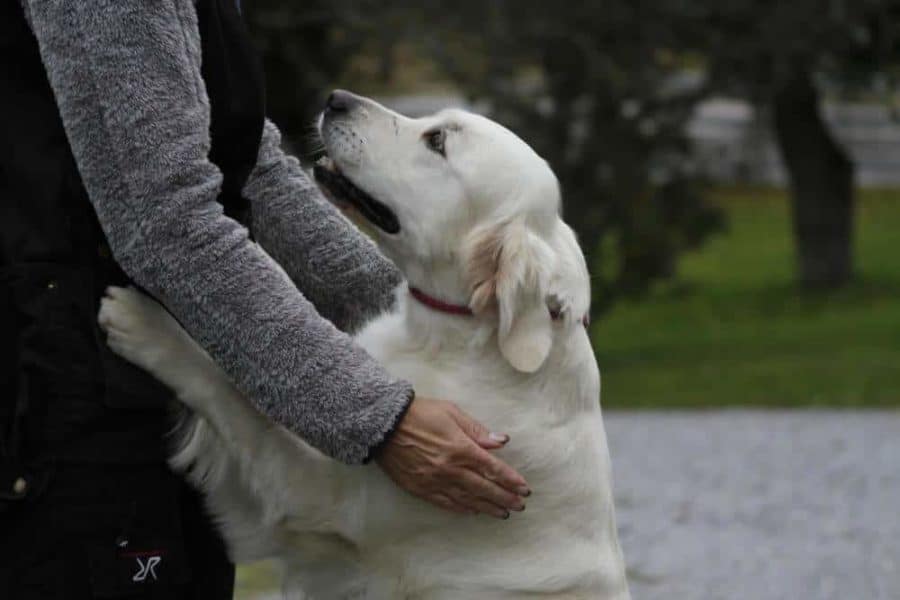 The tendency of dogs to seek contact with their owners is associated with genetic variations in sensitivity for the hormone oxytocin, according to a new study from Linköping University, Sweden. The results have been published in the scientific journal Hormones and Behavior and contribute to our knowledge of how dogs have changed during their development from wolf to household pet.

During their domestication from their wild ancestor the wolf to the pets we have today, dogs have developed a unique ability to work together with humans. One aspect of this is their willingness to “ask for help” when faced with a problem that seems to be too difficult. There are, however, large differences between breeds, and between dogs of the same breed. A research group in Linköping, led by Professor Per Jensen, has discovered a possible explanation of why dogs differ in their willingness to collaborate with humans.

The researchers suspected that the hormone oxytocin was involved. It is well-known that oxytocin plays a role in social relationships between individuals, in both humans and animals. The effect of oxytocin depends on the function of the structure that it binds to, the receptor, in the cell. Previous studies have suggested, among other things, that differences in dogs’ ability to communicate are associated with variations in the genetic material located close to the gene that codes for the oxytocin receptor. The researchers in the present study examined 60 golden retrievers as they attempted to solve an insoluble problem.

“The first step was to teach the dogs to open a lid, and in this way get hold of a treat. After this, they were given the same task with the lid firmly fixed in place, and thus impossible to open. We timed the dogs to see how long they attempted on their own, before turning to their owner and asking for help,” says Mia Persson, PhD student at the Department of Physics, Chemistry and Biology, and principal author of the article.

Before the behavioural test, the researchers increased the levels of oxytocin in the dogs’ blood by spraying the hormone into their nose. As a control, the dogs carried out the same test after having received a spray of neutral salt water in the same way. The researchers also collected DNA using a cotton swab inside the dogs’ cheek, and determined which variant of the gene for the oxytocin receptor that each dog had.

The results showed that dogs with a particular genetic variant of the receptor reacted more strongly to the oxytocin spray than other dogs. The tendency to approach their owner for help increased when they received oxytocin in their nose, compared with when they received the neutral salt water solution. The researchers suggest that these results help us understand how dogs have changed during the process of domestication. They analysed DNA also from 21 wolves, and found the same genetic variation among them. This suggests that the genetic variation was already present when domestication of the dogs started, 15,000 years ago.

“The results lead us to surmise that people selected for domestication wolves with a particularly well-developed ability to collaborate, and then bred subsequent generations from these,” says Mia Persson.

The genetic variations that the researchers have studied do not affect the oxytocin receptor itself: they are markers used for practical reasons. Further research is necessary to determine in more detail which differences in the genetic material lie behind the effects.

Per Jensen points out that the study shows how social behaviour is to a large extent controlled by the same genetic factors in different species.

“Oxytocin is extremely important in the social interactions between people. And we also have similar variations in genes in this hormone system. This is why studying dog behaviour can help us understand ourselves, and may in the long term contribute to knowledge about various disturbances in social functioning,” he says.