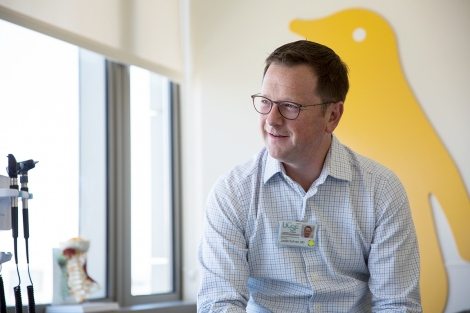 A new formulation of a drug that was used to treat children with a rare neurological condition in the 1980s, and later became half of a widely used diet-drug combination, may offer promise for pediatric patients with a severe seizure disorder, following a large-scale trial led by UC San Francisco.

According to data released on Sept. 29, 2017, from a multicenter, phase III clinical trial, 70 percent of children with Dravet syndrome experienced at least 50 percent fewer seizures each month when they were treated with the investigational drug ZX008, or fenfluramine.

“Dravet syndrome is a devastating condition that severely impacts the quality of life for both the children and their families,” said Joseph Sullivan, MD, associate professor of neurology and pediatrics at UCSF, and the principal investigator of the study. “These results are very encouraging. Even reducing seizures for these children to once a month, instead of once or twice a week, makes a tremendous difference in their lives.”

Dravet syndrome is a form of childhood-onset epilepsy that affects approximately one in 15,700 individuals in the United States. It is a lifelong condition, in which frequent seizures are accompanied by language and motor impairments, hyperactivity and difficulty relating to others, according to the National Institute of Neurological Disorders and Stroke.

Approximately 10 to 15 percent of children with Dravet syndrome die by age 25, most commonly due to so-called sudden unexpected death, which is markedly more prevalent in people with epilepsy. In up to 80 percent of cases, Dravet syndrome is caused by defects in a gene required for the proper function of brain cells.

In the study, 119 children and teens under age 19 with Dravet syndrome were enrolled at hospitals in the United States, Canada, Europe and Australia, and randomly assigned to either 0.8 mg/kg/day or 0.2mg/kg/day of the investigational drug, with a maximum total dose of 30 mg per day, or a placebo.

“Since the degree of cognitive impairment may correlate with the frequency of seizures, our hope is that more effective treatments may also reduce these impairments,” said Sullivan, who is also director of the Pediatric Epilepsy Center at UCSF Benioff Children’s Hospital San Francisco.

First Such Study in the United States

The genesis for identifying Dravet syndrome as a condition that might respond to the drug occurred when it was prescribed for children with self-induction epilepsy, a disorder in which patients deliberately expose themselves to the triggers that cause seizures. While the drug was prescribed to suppress the need to provoke seizures, two doctors noted in 1985 that a “direct anti-epileptic mechanism cannot be excluded.”

Since that time, researchers in Belgium have conducted open-label studies with fenfluramine, which suggested that it might be effective in children with Dravet. The UCSF-led clinical trial, which began in April 2016, was the first such study in the United States.

Fenfluramine was one of two medications – with phentermine – that were known as Fen-Phen, a combination that was prescribed in the 1980s to treat adult obesity. Fenfluramine was withdrawn from the market in 1997, following reports of heart valve damage at the dosage of 60 mg to 120 mg per day.

Sullivan said the children in this study were followed very closely with echocardiograms and none experienced heart valve problems.