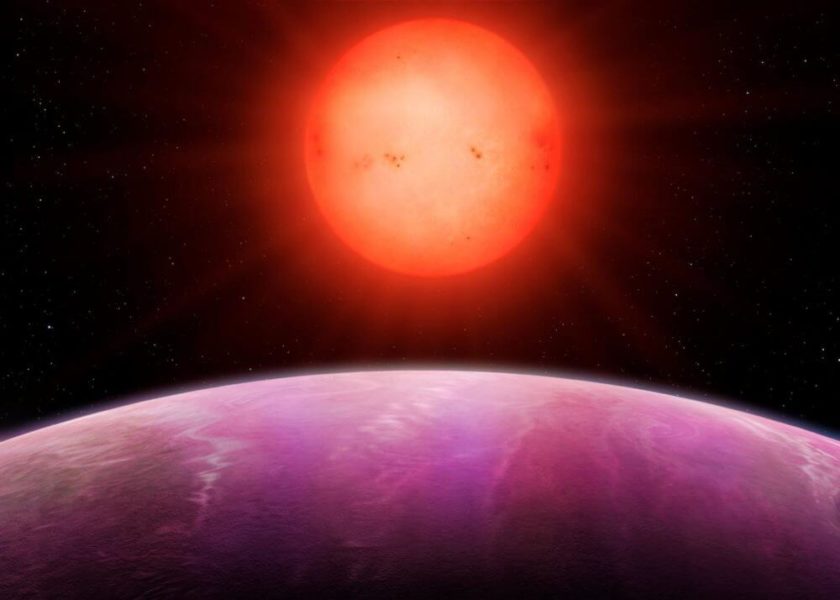 A giant planet – the existence of which was previously thought extremely unlikely – has been discovered by an international collaboration of astronomers, with the University of Warwick taking a leading role.

New research, led by Dr Daniel Bayliss and Professor Peter Wheatley from the University of Warwick’s Astronomy and Astrophysics Group, has identified the unusual planet NGTS-1b – the largest planet compared to the size of its companion star ever discovered in the universe.

NGTS-1b is a gas giant six hundred light years away, the size of Jupiter, and orbits a small star with a radius and mass half that of our sun.

Its existence challenges theories of planet formation which state that a planet of this size could not be formed by such a small star. According to these theories, small stars can readily form rocky planets but do not gather enough material together to form Jupiter-sized planets.

The planet is a hot Jupiter, at least as large as the Jupiter in our solar system, but with around 20% less mass. It is very close to its star – just 3% of the distance between Earth and the Sun – and orbits the star every 2.6 days, meaning a year on NGTS-1b lasts two and a half days.

The temperature on the gassy planet is approximately 530°C, or 800 kelvin.

Dr Daniel Bayliss, the lead author of the research, commented:

“The discovery of NGTS-1b was a complete surprise to us – such massive planets were not thought to exist around such small stars. This is the first exoplanet we have found with our new NGTS facility and we are already challenging the received wisdom of how planets form.

“Our challenge is to now find out how common these types of planets are in the Galaxy, and with the new NGTS facility we are well-placed to do just that.”

The planet orbits a red M-dwarf – the most common type of star in the universe, leading to the possibility that there could be more of these planets waiting to be found by the NGTS survey.

NGTS-1b is the first planet outside our solar system to have been discovered by the NGTS facility, which is situated at the European Southern Observatory’s Paranal Observatory in Northern Chile.

Professor Peter Wheatley, who is from the University of Warwick and leads NGTS, commented:

“NGTS-1b was difficult to find, despite being a monster of a planet, because its parent star is small and faint. Small stars are actually the most common in the universe, so it is possible that there are many of these giant planets waiting to found.

“Having worked for almost a decade to develop the NGTS telescope array, it is thrilling to see it picking out new and unexpected types of planets. I’m looking forward to seeing what other kinds of exciting new planets we can turn up.”

The researchers made their discovery by monitoring patches of the night sky over many months, and detecting red light from the star with innovative red-sensitive cameras. They noticed dips in the light from the star every 2.6 days, implying that a planet was orbiting and periodically blocking starlight.

Using these data, they then tracked the planet’s orbit around its star and calculated the size, position and mass of NGTS-1b by measuring the radial velocity of the star – finding out how much the star ‘wobbles’ during orbit, due to the gravitational tug from the planet, which changes depending on the planet’s size.

The research, ‘NGTS-1b: a hot Jupiter transiting an M-dwarf’, will be published in the Monthly Notices of the Royal Astronomical Society.