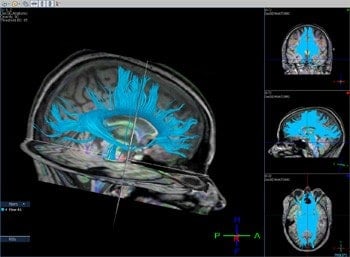 Using advanced imaging techniques and cognitive tests, researchers at Albert Einstein College of Medicine of Yeshiva University and Montefiore Medical Center , the University Hospital and academic medical center for Einstein, have shown that repeatedly heading a soccer ball increases the risk for brain injury and cognitive impairment. The imaging portion of the findings was presented today at the annual meeting of the Radiological Society of North America (RSNA) in Chicago.

The researchers used diffusion tensor imaging (DTI), an advanced MRI-based imaging technique, on 38 amateur soccer players (average age: 30.8 years) who had all played the sport since childhood. They were asked to recall the number of times they headed the ball during the past year. (Heading is when players deliberately hit or field the soccer ball with their head.) Researchers ranked the players based on heading frequency and then compared the brain images of the most frequent headers with those of the remaining players. They found that frequent headers showed brain injury similar to that seen in patients with concussion, also known as mild traumatic brain injury (TBI).

The findings are especially concerning given that soccer is the world’s most popular sport with popularity growing in the U.S., especially among children. Of the 18 million Americans who play soccer, 78 percent are under the age of eighteen. Soccer balls are known to travel at speeds as high as 34 miles per hour during recreational play, and more than twice that during professional play.

After confirming the potentially damaging impact of frequent heading, “Our goal was to determine if there is a threshold level for heading frequency that, when surpassed, resulted in detectable brain injury,” said lead author Michael Lipton, M.D., Ph.D. , director of Einstein’s Gruss Magnetic Resonance Research Center and medical director of MRI services at Montefiore. Further analysis revealed a threshold level of approximately 1,000 to 1,500 heads per year. Once players in the study exceeded that number, researchers observed significant injury.

“While heading a ball 1,000 or 1,500 times a year may seem high to those who don’t participate in the sport, it only amounts to a few times a day for a regular player,” observed Dr. Lipton, who is also associate professor of radiology, of psychiatry and behavioral sciences ), and of the Dominick P. Purpura Department of Neuroscience at Einstein.

“Heading a soccer ball is not an impact of a magnitude that will lacerate nerve fibers in the brain,” said Dr. Lipton. “But repetitive heading may set off a cascade of responses that can lead to degeneration of brain cells.”

Researchers identified five areas, in the frontal lobe (behind the forehead) and in the temporo-occipital region (the bottom-rear areas) of the brain that were affected by frequent heading – areas that are responsible for attention, memory, executive functioning and higher-order visual functions. In a related study, Dr. Lipton and colleague Molly Zimmerman, Ph.D. , assistant professor in the Saul R. Korey Department of Neurology at Einstein, gave the same 38 amateur soccer players tests designed to assess their neuropsychological function. Players with the highest annual heading frequency performed worse on tests of verbal memory and psychomotor speed (activities that require mind-body coordination, like throwing a ball) relative to their peers.

“These two studies present compelling evidence that brain injury and cognitive impairment can result from heading a soccer ball with high frequency,” Dr. Lipton said. “These are findings that should be taken into consideration in planning future research to develop approaches to protect soccer players.”

Heading is an essential part of soccer and is unlikely to be eliminated from practice or play.

As there appears to be a safe range for heading frequency, additional research can help refine this number, which can then be used to establish heading guidelines. As in other sports, the frequency of potentially harmful actions in practice and games could be monitored and restricted based on confirmed unsafe exposure thresholds.

“In the past, pitchers in Little League Baseball sustained shoulder injuries at a rate that was alarming,” Dr. Lipton noted. “But ongoing research has helped shape various approaches, including limits on the amount of pitching a child performs, which have substantially reduced the incidence of these injuries.”

“Brain injury due to heading in children, if we confirm that it occurs, may not show up on our radar because the impairment will not be immediate and can easily be attributed to other causes like ADHD or learning disabilities,” continued Dr. Lipton. “We, including the agencies that supervise and encourage soccer play, need to do the further research to precisely define the impact of excessive heading on children and adults in order to develop parameters within which soccer play will be safe over the long term.”