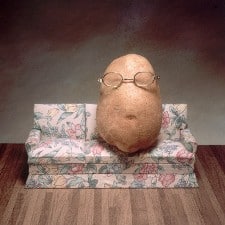 Conventional wisdom says that exercise is a key to weight loss — a no-brainer. But now, Tel Aviv University researchers are revealing that life as a couch potato, stretched out in front of the TV, can actually be “active inactivity” — and cause you to pack on the pounds.

Such inactivity actually encourages the body to create new fat in fat cells, says Prof. Amit Gefen of TAU’s Department of Biomedical Engineering. Along with his Ph.D. student Naama Shoham, Prof. Gefen has shown that preadipocyte cells — the precursors to fat cells — turn into fat cells faster and produce even more fat when subject to prolonged periods of “mechanical stretching loads” — the kind of weight we put on our body tissues when we sit or lie down.

The research, which has been published in the American Journal of Physiology — Cell Physiology, demonstrates another damaging effect of a modern, sedentary lifestyle, Prof. Gefen notes. “Obesity is more than just an imbalance of calories. Cells themselves are also responsive to their mechanical environment. Fat cells produce more triglycerides, and at a faster rate, when exposed to static stretching.”

Prof. Gefen, who investigates chronic wounds that plague bed-ridden or wheelchair-bound patients, notes that muscle atrophy is a common side effect of prolonged inactivity. Studying MRI images of the muscle tissue of patients paralyzed by spinal cord injuries, he noticed that, over time, lines of fat cells were invading major muscles in the body. This spurred an investigation into how mechanical load — the amount of force placed on a particular area occupied by cells — could be encouraging fat tissue to expand.

In the lab, Prof. Gefen and his fellow researchers stimulated preadipocytes with glucose or insulin to differentiate them into fat cells. Then they placed individual cells in a cell-stretching device, attaching them to a flexible, elastic substrate. The test group of cells were stretched consistently for long periods of time, representing extended periods of sitting or lying down, while a control group of cells was not.

Tracking the cultures over time, the researchers noted the development of lipid droplets in both the test and control groups of cells. However, after just two weeks of consistent stretching, the test group developed significantly more — and larger — lipid droplets. By the time the cells reached maturity, the cultures that received mechanical stretching had developed fifty percent more fat than the control culture.

They were, in effect, half-again fatter.

According to Prof. Gefen, this is the first study that looks at fat cells as they develop, taking into account the impact of sustained mechanical loading on cell differentiation. “There are various ways that cells can sense mechanical loading,” he explains, which helps them to measure their environment and triggers various chemical processes. “It appears that long periods of static mechanical loading and stretching, due to the weight of the body when sitting or lying, has an impact on increasing lipid production.”

These findings indicate that we need to take our cells’ mechanical environment into account as well as pay attention to calories consumed and burned, believes Prof. Gefen. Although there are extreme cases, such as people confined to wheelchairs or beds due to medical conditions, many of us live a too sedentary lifestyle, spending most of the day behind a desk. Even somebody with healthy diet and exercise habits will be negatively impacted by long periods of inactivity.

Next, Prof. Gefen and his fellow researchers will be investigating how long a period of time a person can sit or lie down without the mechanical load becoming a factor in fat production. But in the meantime, it certainly can’t hurt to get up and take an occasional stroll, he suggests.

This research was done in collaboration with TAU’s Ruth Gottlieb, Dr. Uri Zaretsky, and Dr. Orna Shaharabani-Yosef from the Department of Biomedical Engineering and Prof. Dafna Benayahu of the Department of Cell and Developmental Biology.