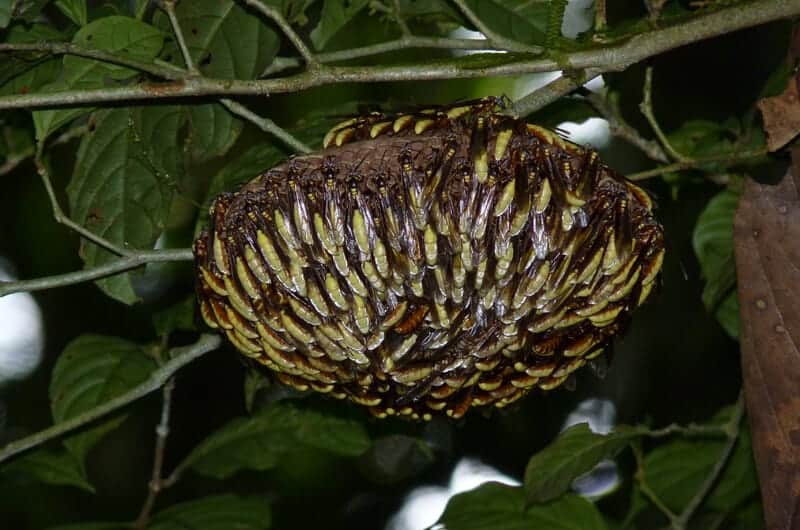 A new Drexel University study comparing brain size to body size shows that just because you’ve evolved to have a big brain, some regions of your brain may not have kept up.

Sean O’Donnell, PhD, professor in the College of Arts and Sciences at Drexel University, and his team studied a wide variety of Costa Rican paper wasps to shed some light on this subject. And what they found was that the wasp brains followed a general biological rule — Haller’s Rule — when it came to overall brain size, but not all brains were equal in structure.

“Brains are not homogeneous masses: They are divided up into subregions that perform different functions,” O’Donnell said. “And we found that not all of these subregions evolve to the same proportional size.”

Overall brain size does evolve in step with body size, but the usual pattern within a lineage of animals — called “Haller’s rule”— is for the smallest species to have the largest brains relative to their body size.

Humans, however, are an exception to Haller’s Rule. Our total brain size is much larger than what our body size would indicate among primates.  So how did our large brains evolve? O’Donnell and his team hoped the paper wasps would begin to provide some clues.

They ran a study (published in the Biological Journal of the Linnean Society) on multiple species of paper wasps within the taxonomic tribe Eponini to determine whether the size of their bodies was related to the sizes of the different parts of their brain.

“These wasps have a tremendous size range among species — the largest species was over 25 times the size of the smallest,” O’Donnell said. “And, importantly, their brains are divided into distinct regions that perform different brain functions, like processing visual versus chemical (smell and taste) inputs.”

The team found that the wasps brains seemed to follow Haller’s Rule. If you’re a little paper wasp, your brain is going to be about the same size as any of your cousin species. But that doesn’t mean that the individual regions of your brain will match up to your bigger cousins.

There appears to be a bit of a caveat to Haller’s Rule, at least when it comes to the wasps. When their body sizes decreased, the proportional size of their brains did increase. However, some of the specific, complex regions of their brain did not.

The wasps’ “mushroom bodies” (a collection of neurological fibers that are involved in learning, memory and sensory integration) and antennal lobes (which process chemical information) significantly decreased in proportional size in smaller-bodied wasps.

In total, O’Donnell and his team examined 94 wasps across 19 species native to Costa Rica. Their findings on the shrinking complex regions of the brain held — except for one species.

O’Donnell and his team found that Apoica pallens, had unusually reduced optic lobes (used for seeing), while its mushroom bodies in the visual processing parts of its brain were much larger than expected.

“We believe their unusual brain structures are related to their nocturnal behavior,” O’Donnell said. “Apoica is a genus of wasps that evolved the ability to fly and hunt at night.”

Such a brain adaptation to their environment is certainly possible — and not just for them, but any species.

“We predict other insect species that made major environmental transitions — from diurnal to nocturnal, or from above to below-ground — to show brain-structure deviations from body size expectations for their lineage,” O’Donnell said.

This is the one of the first times specific brain structures are being looked at in this way. As such, there is a lot that isn’t clear. The researchers aren’t sure what kind of actual effect the different-sized brain lobes might have on the wasps. And it’s also unclear whether such changes are specific to these wasps or could be part of the evolution across the spectrum of social insects (bees, ants, termites etc.) or other types of animals.

“Our findings show that studies of brain-body size relationships should not assume all parts of the brain are equal,” O’Donnell said. “And we hope we’re paving the way to more insight into how bigger, more complex animal brains evolved.”