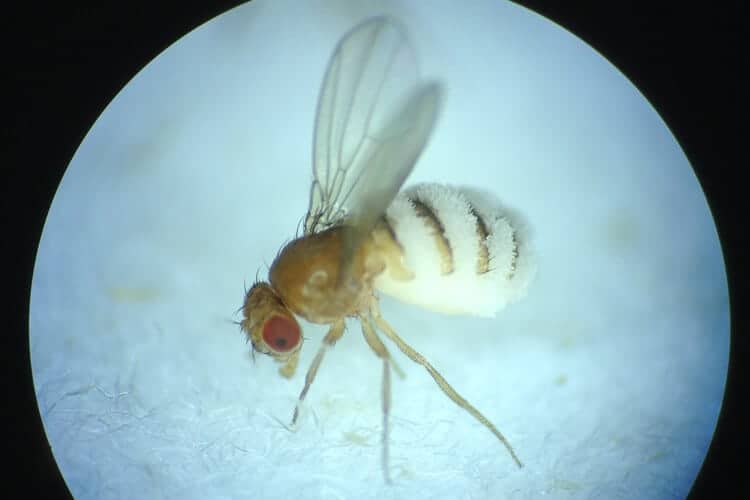 Carolyn Elya discovered the puppet-master on the balcony of her Berkeley apartment. It was a fungus that infects fruit flies, invading their nervous system and eating them from the inside out.

In their death throes, the infected flies – like puppets on a string – obligingly climb to a high point and spread their wings, exposing their abdomen and allowing the fungus to shoot its spores as widely as possible to infect new flies.

Far from repulsed, Elya was excited. When she first saw dead fruit flies lying around a rotting organic watermelon that she placed on her balcony in the summer of 2015, she suspected she was seeing the effects of such a behavior-manipulating fungus.

After days of early morning and late evening visits to the watermelon, she confirmed that a mind-control fungus, was, in fact, infecting the flies, and she quickly brought laboratory fruit flies, Drosophila melanogaster, home to get them infected as well.

She achieved success only after ditching the standard food used to feed flies in the lab, which contains an antifungal agent.

“I thought this was a big, bad, evil thing crazed with infecting lots of flies, but the fungus is actually pretty wimpy,” Elya said.

“I think of this as like the invasion of the body snatchers,” Elya said. “When I tell people what I do, they’re normally grossed out, but then I tell them that it can’t infect humans and they get really interested.”

She took the infected flies back to her UC Berkeley lab, where she was a doctoral student working with molecular and cell biology professor Michael Eisen, and has been studying them ever since to determine how the fungus controls the behavior of flies.

“There are several well-known examples of microorganisms – bacteria, fungi and protozoa – that manipulate animal behavior in the natural world, but we don’t yet understand how these organisms hijack an animal’s nervous system,” Elya said. Now, because Drosophila has been so thoroughly studied in the lab, she had the tools to find out.

The fungus has been known for 160 years and is called Entomophthora muscae. The genus name means “destroyer of insects.” And the behavior it induces is not unusual among fungi that infect insects. There are related fungi that invade ants, aphids, beetles and crickets and alter their behavior, including making them embark on a fatal climb to a high point from which fungal spores can be spread widely. In fact, this has a name: summit disease.

“Microbes are the most innovative part of life,” Eisen recently told a reporter for The Atlantic magazine. “Logic tells us that any time there are interactions between microbes and animals, which is all the time, some microbes will have figured out ways of manipulating the behavior of their host to their advantage.”

One thing Elya has already learned is that the fungus gets inside the fly’s nervous system early in infection, which could be an important clue as to how the fungus changes the fly’s behavior, she said.

While infiltrating the nervous system, she found, it feeds off the fly’s fat stores as the fly goes about its daily behavior, apparently little affected.

“As far as I could tell, the flies are clueless,” she said.

Only after all the fat is consumed does the fly’s behavior become abnormal, apparently as the fungus invades and destroys its organs. This is when the fly starts spending more time on higher perches. Eventually, the fungus appears to grow out of its proboscis – the siphon through which is sucks liquid food – and stick to whatever surface the fly is on, cementing it in place. Then the fly raises its wings to an unnatural 90-degree angle and freezes in place, dead.

“As far as I can tell, it holds off on eating the brain until after it kills the fly,” Elya said. “That’s also when it eats the muscles.”

Elya and Eisen published their fascinating findings last week in the journal eLife, and are continuing their studies. Now a postdoc at Harvard University in the lab of Benjamin de Bivort, Elya is focusing how the fungus gets the fly to climb.

At UC Berkeley, Eisen and graduate student Maxwell Coyle are intrigued by a virus they found that, surprisingly, infects the fungus that infects the fly.

But irony is lost on fungi.

To read more about the research, in particular the new virus, read Ed Yong’s article in The Atlantic. Elya’s work was funded by a fellowship from the National Science Foundation. Eisen is a Howard Hughes Medical Institute investigator.