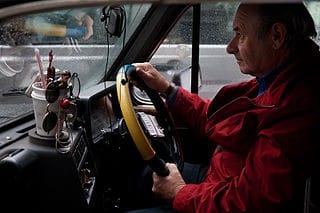 Acquiring ‘the Knowledge’ – the complex layout of central London’s 25,000 streets and thousands of places of interest – causes structural changes in the brain and changes to memory in the capital’s taxi drivers, new research funded by the Wellcome Trust has shown.

The study, published today in the journal Current Biology, supports the increasing evidence that even in adult life, learning can change the structure of the brain, offering encouragement for life-long learning and the potential for rehabilitation after brain damage.

In order to qualify as a licensed London taxi driver, a trainee must acquire ‘the Knowledge’ of capital’s tens of thousands of streets and their idiosyncratic layout. This training typically takes between three to four years, leading to a stringent set of examinations which must be passed in order to obtain an operating licence; only around half of trainees pass. This comprehensive training and qualification procedure is unique among taxi drivers anywhere in the world.

Previous studies of qualified London taxi drivers, led by Professor Eleanor Maguire from the Wellcome Trust Centre for Neuroimaging at UCL (University College London), have shown greater volume of grey matter – the nerve cells in the brain where the processing takes place – in an area known as the posterior hippocampus and less in the anterior hippocampus relative to non-taxi drivers. The studies also showed that whilst taxi drivers displayed better memory for London-based information, they showed poorer learning and memory on other memory tasks involving visual information, suggesting that there might be a price to pay for acquiring the Knowledge. The research suggested that structural brain differences may have been acquired through the experience of navigating, and to accommodate the internal representation of London.

To test whether this was indeed the case, Professor Maguire and colleague Dr Katherine Woollett followed a group of 79 trainee taxi drivers and 31 controls (non-taxi drivers), taking snapshots of their brain structure over time using magnetic resonance imaging (MRI) and studying their performance on certain memory tasks. Only 39 of the group passed the tests and went on to qualify as taxi drivers, giving the researchers the opportunity to divide the volunteers into three groups for comparison: those that passed, those that trained but did not pass, and the controls who never trained.

The researchers examined the structure of the volunteers’ brains at the start of the study, before any of the trainees had begun their training. They found no discernible differences in the structures of either the posterior hippocampus or the anterior hippocampus between the groups, and all groups performed equally well on the memory tasks.

Three to four years later – when the trainees had either passed the test or had failed to acquire the Knowledge – the researchers again looked at images of the brain structures of the volunteers and tested their performance on the memory tasks. This time, they found significant differences in the posterior hippocampus – those trainees that qualified as taxi drivers had greater volume of grey matter in this region compared to before they had started their training. This change was not apparent in those who failed to qualify or the controls. Interestingly, there was no detectable difference in the structure of the anterior hippocampus, suggesting that these changes come later, in response to changes in the posterior hippocampus.

“The human brain remains ‘plastic’, even in adult life, allowing it to adapt when we learn new tasks,” explains Professor Maguire, a Wellcome Trust Senior Research Fellow. “By following the trainee taxi drivers over time as they acquired – or fail to acquire – the Knowledge, a uniquely challenging spatial memory task, we have seen directly and within individuals how the structure of the hippocampus can change with external stimulation. This offers encouragement for adults who want to learn new skills later in life.

“What is not clear is whether those trainees who became fully-fledged taxi drivers had some biological advantage over those who failed. Could it be, for example, that they have a genetic predisposition towards having a more adaptable, ‘plastic’ brain? In other words, the perennial question of ‘nature versus nurture’ is still open.”

In the research paper, Professor Maguire and Dr Woollett speculate on the biological mechanisms that may underpin the changes to the brain that they observed. One theory, supported by studies in rodents, is that when learning that requires cognitive effort takes place and is effective, there is an increase in the rate at which new nerve cells are generated and survive. The hippocampus is one of the few brain areas where the birth of new nerve cells is known to take place. Alternatively, it could be that the synapses, or connections, between existing nerve cells grew stronger in the trainees who qualified.

Dr John Williams, Head of Neuroscience and Mental Health at the Wellcome Trust, comments: “The original study of the hippocampi of London taxi drivers provided tantalising hints that brain structure might change through learning, and now Eleanor’s follow-up study, looking at this directly within individual taxi trainees over time, has shown this is indeed the case. Only a few studies have shown direct evidence for plasticity in the adult human brain related to vital functions such as memory, so this new work makes an important contribution to this field of research.”