More people are physically active due to the Sweatcoin app which rewards you for walking – researchers at the Institute of Digital Healthcare, WMG at the University of Warwick have found. Sweatcoin gets people outdoors and walking to earn a virtual currency to spend in their marketplace.

Reaching your target number of steps a day is a little easier for those using the app called Sweatcoin which rewards users with a virtual currency for walking.

Sweatcoin works by converting the number of steps recorded on your phone into a virtual currency of Sweatcoins.

Every 1,000 steps generate 0.95 Sweatcoins and these can be used to purchase products on the in-app marketplace, (with prices ranging from 5 to 20,000 Sweatcoins), in local shops, or be transferred between other users.

Currently, steps recorded outdoors are rewarded due to the use of a GPS-based verification algorithm used to stop people cheating their phone’s step-counting algorithm.

The Institute of Digital Healthcare, WMG at the University of Warwick analysed daily step count data from 6000 users of the app, and found that there was a sustained average increase of nearly 20% in daily step count over a 6-month period after users had registered with the app, in comparison with a 3-month period prior to downloading the app.

Following a survey on a sample of the original 6000 users, those who were classified as less physically active and overweight were found to be most likely to increase their daily step count when using the app, meaning that Sweatcoin was having impact on an important section of the population who previously had low levels of physical activity. 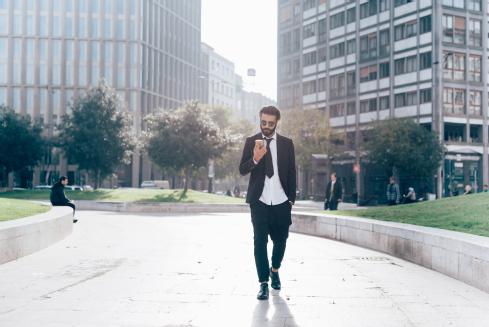 “We were delighted to have the opportunity to work with Sweatcoin and investigate how their app impacts on physical activity behaviour change. By analysing the daily step count data from a sample of Sweatcoin users and combining this with data from the surveys and focus groups facilitated by our researchers, we were able to identify which types of user had shown the biggest change in terms of increased physical activity from using the app.”

“Incentivising people to walk more is key to improving levels of sustained physical activity. Yet, traditional ideas such as providing educational seminars or discounted gym passes, just don’t deliver. The University of Warwick found that an economy built on movement, as created by Sweatcoin, establishes sustained motivation for people to be more active. For an increasingly sedentary population facing an obesity and wellness crisis, these are significant findings.”

“Most health apps and initiatives tend to be aimed at those who are already active. Sweatcoin has huge potential in encouraging and incentivising non-active people to get walking. Given the health gains that can be achieved through increased physical activity, this is the kind of breakthrough we need to help motivate who can benefit most.”