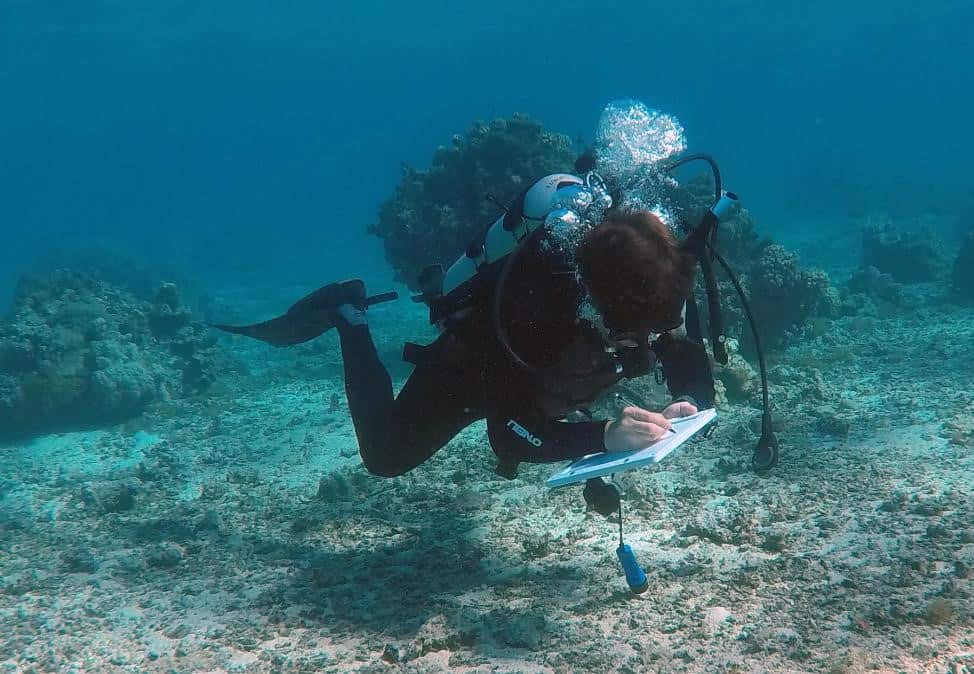 Disturbances in coral reefs can trigger significant ecosystem shifts, but ecologists and local fishing populations may perceive those shifts in fundamentally different ways, according to a study from Florida State University researchers.

This apparent disconnect between data-driven scientists and experience-driven fishing communities could have major implications for the management and resilience of coral reefs and other sensitive marine ecosystems.

Study author Andrew Rassweiler, an assistant professor in FSU’s Department of Biological Science, worked with collaborators from University of California, Santa Barbara and San Diego State University to administer a suite of surveys and fish population assessments on the French Polynesian island of Moorea

“Our study emphasizes that different groups have different perceptions of change and ecosystem health,” Rassweiler said.

The findings were published in the journal Ambio.

Coral reefs around the world are experiencing considerable pressure from human activity. As ecosystems succumb to these pressures, biodiversity declines and coastal communities — which depend on the vitality of coral reefs — become less economically and culturally secure.

In Moorea, this process has historically taken on a patchwork quality, with some areas of the island’s lagoons supporting robust coral communities and other areas giving way to overgrowth by seaweed. But after an outbreak of coral-devouring crown-of-thorns sea stars in 2009 and a destructive cyclone in 2010, live coral cover in many locations around the island was reduced by upward of 95 percent.

These destabilizing events threw the ecosystem into disarray. In addition to widespread coral loss, fish abundances changed abruptly, with herbivorous fish swarming the area to graze on seaweed growing on the skeletons of dead coral.

This influx of seaweed-feeding fish wasn’t necessarily a surprise. Long-term ecological research on the island had identified the role of herbivorous fish in keeping seaweed forests in check. But less was known about how Moorea’s local fishing communities, where more than three-quarters of households contain a member who actively fishes the reef, reacted to this rapid and radical shift in fish abundances.

“Everyone around the island is fishing, but we know very little about how fishers decide where to fish and what fish to target,” Rassweiler said. “This paper was a first step in looking at how people’s fishing behavior changed following a big change in the fish community.”

By comparing the fish caught and sold around the island to the fish observed by researchers on the reef, Rassweiler’s team determined that the shifting abundances of reef-dwelling fish communities were reflected in shifting compositions of the fish people caught. Most notable was a decrease in Naso, or unicornfish, which islanders would eat multiple times a week before the 2009 and 2010 disturbances, and an increase in algae-eating parrotfish, which began to appear in higher concentrations on the reef after the mass coral die-off.

These changes, however, were not perceived by the locals to be especially significant. Surveys indicated that while residents of the island were aware of shifts in the reef, the disturbances did not prompt appreciable changes in fishing behavior. Even more puzzling, the islanders did not report changes in the composition of fish they caught, sold and ate, despite the scientific evidence.

“Fish consumers can have very different perceptions than scientists and resource managers, even in a place where locals are closely connected to reefs,” said Dan Thornhill, a program director in the National Science Foundation’s Division of Ocean Sciences, which funded the study along with NSF’s Dynamics of Coupled Natural and Human Systems program. “That will be an important consideration going forward in the sustainable management of reefs and the fisheries they support.”

As both unicornfish and parrotfish were prized by fishers before the ecological disturbances, researchers said that the shifting abundances of the two types of fish may not have registered to Moorea’s fishing communities as a particularly important event.

“Moorea’s fishers view the environment as naturally variable, and the changes in the abundances of fishes on the reef resulting from the environmental disturbances are a normal occurrence for them,” said study co-author and U.C. Santa Barbara ecologist Sally Holbrook.

These changes were, however, of major concern to scientists, for whom seemingly small changes in population abundances could be portents of deeper ecological dysfunction.

“Scientists have demonstrated that these shifts are ecologically very important, but for fishers they were not as significant,” Rassweiler said. “This is part of a bigger project where we’re working with the fishers to think about reef health and management. It’s been enlightening because they have unique insight about the status of different species.”

Added San Diego State anthropologist Matthew Lauer: “It’s fascinating that scientists and Polynesian fishers, both of whom spend a huge amount of time on these reefs, have such radically differing standpoints about ecosystem change. Getting a handle on their differing views about marine health and change will not only help us learn more about these reefs but can also contribute to more effective and collaborative resource management.”

FSU researcher Sarah Lester also contributed to this study, as well as University of California, Santa Barbara researchers Russell Schmitt, Katrina Munsterman, Hunter Lenihan and Andrew Brooks; and Laboratoire d’Excellence CORAIL scientists Rakamaly Madi Moussa and Joachim Claudet. Along with the NSF, this study was supported by the Gordon and Betty Moore Foundation and the Agence Nationale de la Recherche.