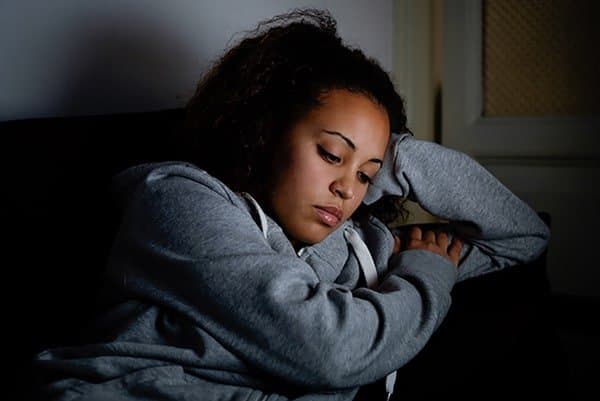 Growing up in poverty and experiencing traumatic events like a bad accident or sexual assault can impact brain development and behavior in children and young adults. Low socioeconomic status (L-SES) and the experience of traumatic stressful events (TSEs) were linked to accelerated puberty and brain maturation, abnormal brain development, and greater mental health disorders, such as depression, anxiety, and psychosis, according to a new study published this week in JAMA Psychiatry. The research was conducted by a team from Perelman School of Medicine at the University of Pennsylvania and Children’s Hospital of Philadelphia (CHOP) through the Lifespan Brain Institute (LiBI).

“The findings underscore the need to pay attention to the environment in which the child grows. Poverty and trauma have strong associations with behavior and brain development, and the effects are much more pervasive than previously believed,” said the study’s lead author Raquel E. Gur, MD, PhD, a professor of Psychiatry, Neurology, and Radiology at the Perelman School of Medicine at the University of Pennsylvania, and director of the Lifespan Brain Institute.

Parents and educators are split into opposing camps with regard to the question of how childhood adversity affects development into mature, healthy adulthood. Views differ from “spare the rod and spoil the child” to concerns that any stressful condition such as bullying will have a harmful and lasting effects. Psychologists and social scientists have documented lasting effects of growing up in poverty on cognitive functioning, and clinicians observed effects of childhood trauma on several disorders, though mostly in the context of post-traumatic stress disorders (PTSD). There are also anecdotal observations, supported by some research, that adversity accelerates maturation—children become young adults faster, physically and mentally. Neuroscientists, who are aware of the complexity of changes that the brain must undergo as it transitions from childhood to young adulthood, suspected, and more recently documented that childhood adversity affects important measures of brain structure and function. But this study was the first to compare the effects of poverty (L-SES) to those who experienced TSEs in the same sample set.

The researchers analyzed data from the Philadelphia Neurodevelopmental Cohort, which included 9,498 participants aged 8 to 21 years for the study. The racially and economically diverse cohort includes data on SES, TSEs, neurocognitive performance, and in a subsample, multimodal neuroimaging taken via MRI.

The findings revealed that poverty was associated with small elevation in severity of psychiatric symptoms, including mood/anxiety, phobias, externalizing behavior (oppositional-defiant, conduct disorder, ADHD), and psychosis, as compared to individuals who did not experience poverty. The magnitude of the effects of TSEs on psychiatric symptom severity was unexpectedly large. TSEs were mostly associated with PTSD, but here the authors found that even a single TSE was associated with a moderate increase in severity for all psychiatric symptoms analyzed, and two or more TSEs showed large effect sizes, especially in mood/anxiety and in psychosis. Additionally, these effects were larger in females than in males.

With neurocognitive functioning, the case was reversed; poverty was found to be associated with moderate to large cognitive deficits, especially in executive functioning—abstraction and mental flexibility, attention, working memory—and in complex reasoning. TSEs were found to have very subtle effects, with individuals who experienced two or more TSEs showing a mild deficit in complex cognition, but demonstrating slightly better memory performance.

Both poverty and TSEs were associated with abnormalities across measures of brain anatomy, physiology, and connectivity. Poverty associations were widespread, whereas TSEs were associated with more focused differences in the limbic and fronto-parietal regions of the brain, which processes emotions, memory, executive functions and complex reasoning.

The researchers also found evidence that adversity is associated with earlier onset of puberty. Both poverty and experiencing TSEs are associated with the child physically maturing at an earlier age. The researchers also found the same effects on the brain, with findings revealing that a higher proportion of children who experienced adversity had characteristics of adult brains. This affects development, as the careful layering of the structural and functional connectivity in the brain requires time, and early maturity could prevent the necessary honing of skills.

“Altogether our study shows no evidence to support the ‘spare the rod’ approach, to the contrary we have seen unexpectedly strong effects of TSEs on psychiatric symptoms and of poverty on neurocognitive functioning, and both are associated with brain abnormalities,” Gur said. “The study suggests that it makes sense for parents and anyone involved in raising a child to try and shield or protect the child from exposure to adversity. And for those dealing with children who were already exposed to adversity—as is sadly the case today with refugees around the world—expect an increase in symptoms and consider cognitive remediation, a type of rehabilitation treatment which aims to improve attention, memory, and other cognitive functions.”

“Traumas that happen to young children can have lifelong consequences,” said the study’s senior author Ruben C. Gur, PhD, a professor of Psychiatry, Radiology, and Neurology, and director of the Brain Behavior Laboratory. “Obviously it would be best if we could ameliorate poverty and prevent traumatic events from occurring. Short of that, the study calls for paying more attention to a child’s socioeconomic background and to effects of trauma exposure. Parents and educators should become more aware of the special needs of children who are exposed to either adversity. Additionally, mental health professionals should be particularly on notice that traumatic events are associated not only with PTSD, but with elevations across domains including mood, anxiety, and psychosis.”

The study was supported by grants from the National Institute of Mental Health (MH107235, MH089983, MH096891, P50MH06891), the Dowshen Neuroscience fund, and the Lifespan Brain Institute of Children’s Hospital of Philadelphia and Penn Medicine.