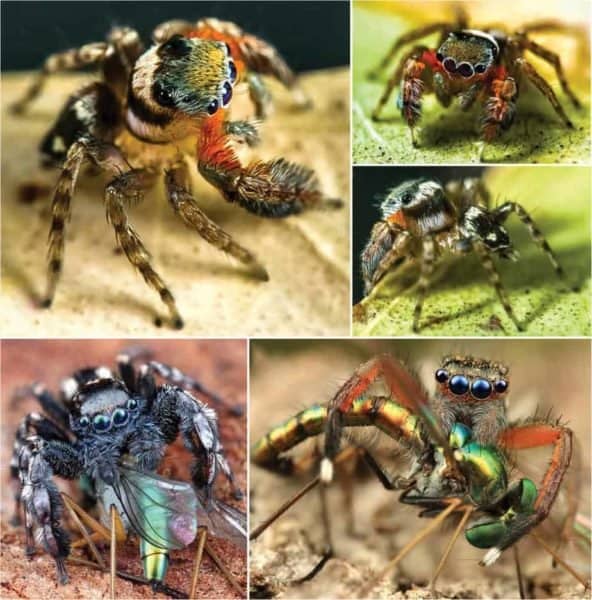 A new to science species of Australian jumping spider was named after Hamburg-born fashion icon Karl Lagerfeld (1933-2019) after the arachnid reminded its discoverers of the designer. Intrigued by its distinct ‘downplayed’ black-and-white colours, the Hamburg-Brisbane-Melbourne team likened the spider’s appearance to Lagerfeld’s trademark style: his white hair and Kent collar that contrasted with the black sunglasses and gloves.

When compared with other members in the ‘brushed’ jumping spider genus Jotus, the novel species clearly stands out due to its black-and-white legs and tactile organs (pedipalps), whereas the typical representative of this group demonstrates striking red or blue colours.

“The animal reminded us with its colours of the reduced style of Karl Lagerfeld. For example, we associate the black leg links with the gloves he always wore”, Danilo Harms explains.

In fact, what was to be now commonly referred to as Karl Lagerfeld’s Jumping Spider was identified amongst specimens in the Godeffroy Collection. Kept at CeNak, the historical collection was originally compiled by the inquisitive and wealthy tradesman from Hamburg Johann Cesar Godeffroy, who financed several expeditions to Australia back in the 19th century. Here, the research team identified another link between Australia, Godeffroy, Hamburg and Jotus karllagerfeldi.

Besides the tiny (4 to 5 mm) arachnid, whose pedipalps resemble a white Kent collar, the scientists describe another seven new to science species and add them to the same genus. Two of those, Jotus fortiniae and Jotus newtoni, were also named after inspirational figures for their hard work and creativity: educator, molecular biologist and science communicator Dr Ellen Fortini (Perth College, Western Australia) and keen naturalist and photographer Mark Newton. All novel species were found either in the Godeffroy Collection or amongst the jumping spiders housed at Queensland Museum.

Surprisingly, even though the genus Jotus comprises numerous species found all over Australia, there is not much known about these spiders. An interesting feature, according to the scientists behind the present study, are the huge telescopic eyes, which allow for spatial vision. The Jotus species need this ability in foraging, since they do not weave webs, but rather hunt in the open. Thus, they have evolved into extremely fast and agile hunters, capable of jumping short distances.

Curiously, back in 2017, the team of Barbara and Danilo, joined by Dr Robert Raven from Queensland Museum, described another previously unknown, yet fascinating species: a water-adapted spider, whose sudden emergence at the coastline of Australia’s “Sunshine State” of Queensland during low tide in January brought up the association with reggae legend Bob Marley and his song “High Tide or Low Tide”. The species, scientifically known as Desis bobmarleyi, was also published in Evolutionary Systematics.