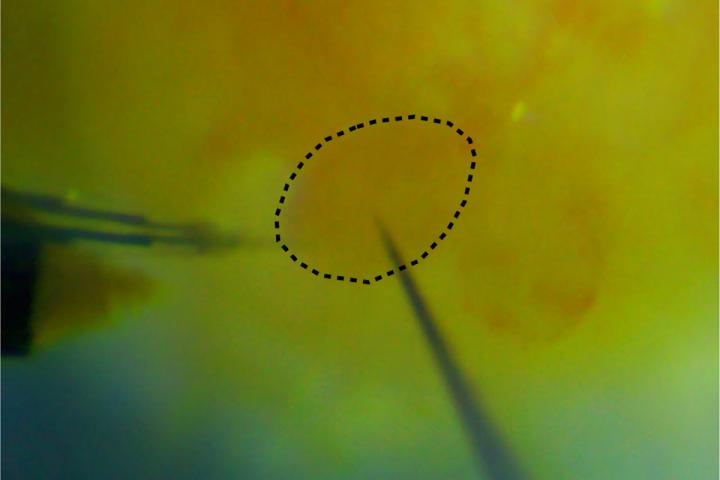 Armed with a tiny new thermometer probe that can quickly measure temperature inside of a cell, University of Illinois researchers have illuminated a mysterious aspect of metabolism: heat generation.

Mitochondria, the cell’s power stations, release quick bursts of heat by unleashing the power stored in an internal proton “battery,” the researchers found. Better understanding of this process could point to new targets for treating obesity and cancer, they say.

Led by mechanical science and engineering professor Sanjiv Sinha, they published their findings in the Nature journal Communications Biology.

“Producing heat is part of the mitochondria’s role in the center of metabolism activity,” Sinha said. “It needs to produce the energy currency that’s used for the activities in the cell, and heat is one of the byproducts, in most cases. But there is a mechanism that can ramp this process up to produce more heat when the body needs it. That’s what fat cells do when they’re in need of heat when the body’s temperature goes down.”

To better understand this ramping up of heat output, the researchers developed a tiny, fast-read thermometer probe to internally measure temperature inside of living cells. The mechanical design proved challenging: It had to be long enough to reach a cell under a microscope, but small enough in diameter not to harm the cell or disrupt its internal processes.

“Think about how we take temperature with a probe under our tongue. We are essentially doing the same, but inside a single cell,” Sinha said. “And we wanted to be very fast to measure what’s happening. Things happen inside the cell very quickly. It’s like, if you’re taking a young child’s temperature, you need to do it very quickly, or they will move and it won’t be accurate.”

Sinha’s group collaborated with researchers from the lab of Rhanor Gillette, a professor emeritus of molecular and integrative physiology at Illinois, to test the probe in a mitochondria-rich strain of neurons. They induced the mitochondria to produce heat using methods established by previous work, but they were startled by the very fast changes in temperature that the probe was able to measure.

“We found some results that were completely different from what has been published before,” said Manjunath Rajagopal, a graduate student and first author of the study. “We saw a sharp temperature spike that is significantly large and short-lived – around 5 degrees Celsius and less than one second. The gold standard for measuring has been with fluorescence, but it is too slow to see this short, high burst of heat. Just with a simple probe measuring at high speed, we have demonstrated that we can find things that other methods have missed.”

Researchers previously assumed that increased heat output from the mitochondria came from increased breaking down of glucose, but the heat spikes that Sinha’s group measured were too high.

“It cannot be releasing that kind of energy from metabolizing stored glucose. It just didn’t make sense,” Sinha said. “Where is it coming from? There has to be a source of that energy.”

The researchers determined that the energy spike was consistent with the discharging of a cellular battery powered by protons. They verified this by inducing similar temperature spikes with special molecules that open up protein channels in the mitochondria’s membrane.

“In the mitochondria, one part of the glucose metabolism reaction stores some of the energy as a proton battery. It pushes all the protons to one side of a membrane, which creates an energy store,” Rajagopal said. “We basically short-circuited the stored energy.”

The researchers plan to use the temperature probe to study the mitochondria short-circuiting process in other cell lines, with the aim of identifying therapeutic targets. For example, fat cells have naturally occurring proteins that open the proton gates to unleash stored proton energy. Sinha’s group would like to collaborate with biologists to study how the process naturally occurs in fat cells when heat is needed – when the body’s temperature drops, for example – and whether the proton-unleashing proteins can be targeted as a treatment for obesity.

“Cancer would be another application,” Rajagopal said. “Cancer cells have a variety of reprogrammed metabolic pathways that are often driven to extremes. This probe provides us a tool to study thermal activity associated with different metabolic pathways.”