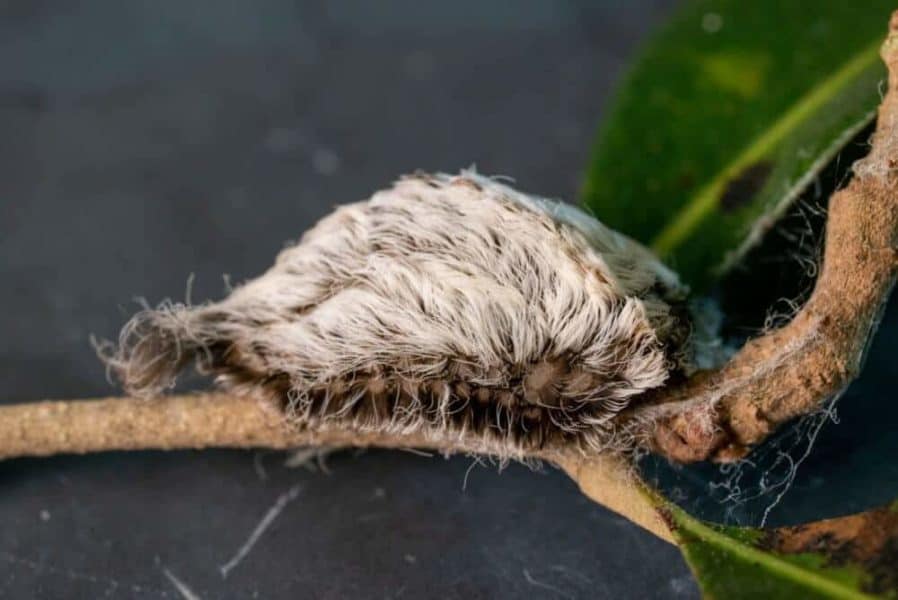 While collecting data from live oak trees in the world’s largest medical center, Rice University evolutionary ecologists have discovered huge quantities of one of North America’s most venomous caterpillars.

Live oak trees lining sidewalks in the Texas Medical Center (TMC) — which is visited by 10 million people seeking health care each year — are routinely netted to discourage pesky birds such as grackles and pigeons. Now Rice researchers have learned the netting has an unintended consequence: Chasing away birds that eat insects has created a haven for a flourishing population of Megalopyge opercularis, commonly referred to as asps.

The asps bristle with venomous spines that can cause severe pain for humans unlucky enough to come in contact with them. When a human is stung by an asp, it can cause localized pain that is compared to blunt-force trauma or a bone break. Symptoms include headaches, nausea, vomiting, fever, low blood pressure, inflammation of lymph nodes and, in severe cases, abdominal distress, muscle spasms, convulsions and respiratory stress.

“I’ve been stung by a lot of things and an asp sting definitely ranks high up there,” said Mattheau Comerford, an ecology and evolutionary biology graduate student at Rice who is also a U.S. Army veteran. “It takes about 10 minutes before the pain kicks in so you might not even realize you’ve been stung at first. It feels like a broken bone and the pain lasts for hours. I was stung on the wrist and the pain traveled up my arm, into my arm pit, and my jaw started to feel pain.”

The TMC, in addition to hosting a vulnerable population seeking health care, is the eighth-largest business district in the country, employing more than 106,000 people.

“There are a lot of people that congregate in the green spaces of TMC,” said Glen Hood, a research assistant professor of biological sciences at Wayne State University and a former member of the Rice Academy of Fellows. “It becomes this scenario of what’s worse — bird guano or venomous asps — and is there a happy medium?”

Scott Egan, an assistant professor of biosciences at Rice, has spent almost 20 years studying live oaks from Florida to Texas and is used to seeing the asps, which resemble tufts of fur. He said asp stings are common in live-oak country, even though the insects typically occur in low numbers under natural conditions.

“When we saw such high numbers of asps in the TMC, we knew this was something we needed to look into,” he said. “The Egan Lab addresses important conceptual issues in ecology, evolution and conservation biology, and we do that through the lens of specializing in one single system.”

As specialists in the live oak system, Egan and his team can observe unique differences or slight changes that a general scientist might not be able to see. That’s what sparked the study entitled “Human-mediated disturbance in multitrophic interactions results in outbreak levels of North America’s most venomous caterpillar,” which is published in the journal Biology Letters.

“We thought this was a wonderful, natural, already-occurring experiment that we could exploit to understand what happens when trophic interactions get disrupted,” Egan said. “We observed that there were a higher number of asps in the TMC than on Rice’s campus, so we performed an observational study across many sites in this area over a three-year span: trees that have massive nets and deter birds, versus naturally occurring systems such as live oak trees and the caterpillars that feed on them.”

Egan’s team discovered that caterpillar abundance, on average, was more than 7,300% higher on netted versus non-netted trees.

“The patterns in the data are overwhelming and striking,” said Hood, the study’s lead author and a former postdoctoral research fellow in Egan’s lab. “It’s highly suggestive that when you don’t take into account the natural interactions taking place within a community or ecosystem, even in an urban setting, it can cause unforeseen consequences.”

Egan and his team were especially interested in the location of the netted trees — lining the sidewalks, green spaces and streets of the TMC.

“In this area, there is a high density of people with allergies and compromised or depleted immune systems, putting them at a higher risk for the ill effects of the asp stings,” Comerford said.

Egan said nuisance birds are a widespread problem, and the kind of nets used in the TMC are a common sight in cities, fruit orchards and commercial nurseries. He said TMC staff helped his team with its research, giving students access to trees and opening up netting for sample collection.

“There is no ‘bad guy’ here,” Egan said. “Urban bird pests are a real problem, and birds can carry diseases and pose health risks, too. Netting trees is a way to address that problem, and we do not know if netting trees leads to an increase in asp stings. What our study shows is the complexity of the problem. Asps are yet another dimension to something that was already a multi-dimensional problem.”

Humans may not be the only species at risk from asps. The Houston Zoo, located on the northeast edge of the TMC, houses more than 6,000 animals from 900 different species. Many zoos use netting to cover animal enclosures and observation areas, and Egan’s team said that could facilitate similar asp outbreaks and increase animal and human exposure.

Amanda Weaver noticed the surge of asps covering netted trees in the TMC while she was working on a separate project for her senior thesis as an undergrad in the Egan Lab.

“I thought this project was really interesting because I had never heard of asps before I got to Rice,” said Weaver, now a graduate student at Columbia University. “I remember getting the warning emails from Rice and seeing the rashes from my classmates who had been stung. Especially because they are not prevalent everywhere, my biggest concern is that people may not know they are venomous. In fact, they actually look cute.”

Rice’s status as a registered arboretum and its next-door proximity to the TMC allowed Egan’s team to gather data from many sites over a three-year span.

“Like a lot of things in biology, this experiment happened serendipitously,” Hood said. “If you’re inquisitive and paying attention to the details, you’ll see an opportunity to collect data.”

By spotlighting an unforeseen consequence of ecological disturbance, Egan and his team hope the study emphasizes the importance of considering ecology in urban planning.

“When we try to manage environments, it’s very difficult for us to predict all of the implications or consequences,” Comerford said. “It’s very easy to say the birds are a problem and we can fix it by removing their nesting sites. But if you don’t think through the pipeline, you can ultimately create unintended downstream effects.”

The study was co-authored by Patricia Morton, a former Rice Academy of Fellows postdoctoral reseacher and assistant professor of sociology at Wayne State University.