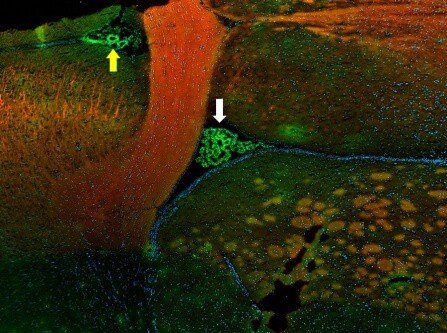 Image of a tissue section from the brain of a rat that received perispinal injection of a TNF-antibody (labeled green). The white and yellow arrows indicate where the TNF-antibody (green) has reached the brain, in the lateral ventricle and the brain’s blood vessels. The image was created using a type of microscopy called multispectral fluorescence, which uses lasers to detect different fluorescent labels. (Credit: T.A. Ignatowski, with special thanks to Dr. Amber Worral, Director of the Multispectral Imaging Suite, who assisted with imaging.)

University at Buffalo researchers who previously discovered how chronic neuropathic pain arises in the brain have now developed a treatment to block it.

The research conducted by scientists in the Jacobs School of Medicine and Biomedical Sciences at UB was published online July 31 in the journal Brain, Behavior, and Immunity.

“Our preclinical research findings suggest an entirely new procedure and novel target in the brain to alleviate chronic pain in humans,” said Tracey Ignatowski, PhD, assistant professor in the Department of Pathology and Anatomical Sciences, and corresponding author on the paper. “The findings are particularly important given the current national opioid epidemic and the imminent need for new methods for treating chronic pain.”

The new, minimally invasive procedure developed by the UB researchers utilizes delivery of an antibody that targets and thus blocks the pro-inflammatory protein called tumor necrosis factor-alpha (TNF), specifically in the brain.

Unlike acute pain that occurs in response to a sudden injury, chronic neuropathic pain can develop slowly in response to nerve damage that occurs over time. It is a growing global problem seen increasingly among patients with diseases, such as diabetes, stroke, traumatic brain injury, multiple sclerosis and cancer.

The possibility of an effective and safe new treatment method for chronic neuropathic pain would be welcome news, since treatments have so far proven to have side effects, including addiction, and result in limited relief of pain.

“We previously showed that in neuropathic pain, the accumulation of TNF in the brain, specifically the hippocampus, causes the dysregulation of the normal analgesic response,” said Ignatowski. “We propose that enhanced levels of TNF in the brain inhibit the release of norepinephrine. Normally, norepinephrine would activate the descending inhibitory pain pathway that projects to the spinal cord, thereby alleviating pain. But when activation of this inhibitory pathway is lost, pain may transition to a chronic state.”

The new method originated with the UB researchers’ discovery in 1999 of TNF, a novel therapeutic target, specifically in the brain. They previously demonstrated that peripheral nerve injury—injury to the nerves connecting the spinal cord to the rest of the body—boosts levels of this protein in the hippocampus, a part of the brain responsible for learning and memory, and which they have recently found to be involved in the experience of chronic pain.

“We previously established that in order for chronic pain to develop, there must be enhanced TNF production in the brain,” said Ignatowski, who is also a faculty member in the neuroscience program in the Jacobs School. “Our current work demonstrates that treatments that selectively block brain-TNF reduce pain in animal models.”

Treating the brain without surgery

The research is groundbreaking because it demonstrates a way to get to the root of chronic neuropathic pain in the brain in a minimally invasive way. “Previously, brain delivery was thought to require either brain surgery or a spinal tap,” said Ignatowski.

“We have shown, for the first time, that effective pain relief in an animal model could be achieved by direct brain delivery accomplished with a simple peripheral (outside of the brain and spinal cord) injection in the neck of an anti-TNF drug.”

“This is the first time that perispinal delivery of a drug has ever been demonstrated to provide rapid, sustained pain relief in an animal model,” said Ignatowski.

The researchers are now studying how blocking TNF activity in the brain produces analgesia, relief from pain, including determining the receptor and signaling pathways, and which cell types and brain regions are involved.

“Ultimately, we predict that any type of chronic pain that involves altered neuron functioning (neuroplasticity) would be susceptible to this treatment,” said Ignatowski.

The team has initiated studies using additional diverse pain models, such as a persistent pain model, as well as a chemotherapy-induced neuropathic pain model.

“Based upon our preclinical data, perispinal administration, as a novel injection method to non-invasively enhance delivery of large molecules to the brain, has enormous potential to increase our understanding of brain pathophysiology,” said Robert Spengler, co-director of research and development in the neuroscience division of NanoAxis, LLC, former faculty member in the Department of Pathology and Anatomical Sciences, and a co-author.

UB co-authors with Ignatowski are Zach M. LaMacchia, Muhammad Jaffari, Asif H. Abidi and Tariq Ahmed, all of the Department of Pathology and Anatomical Sciences and Natasha Singh, currently an MD candidate in the Jacobs School. Edward L. Tobinick of the Institute for Neurological Recovery is also a co-author.

Funding for the research is being provided by the Department of Pathology and Anatomical Sciences.

1 thought on “Treatment for chronic neuropathic pain gets to the brain via a novel route, without surgery”