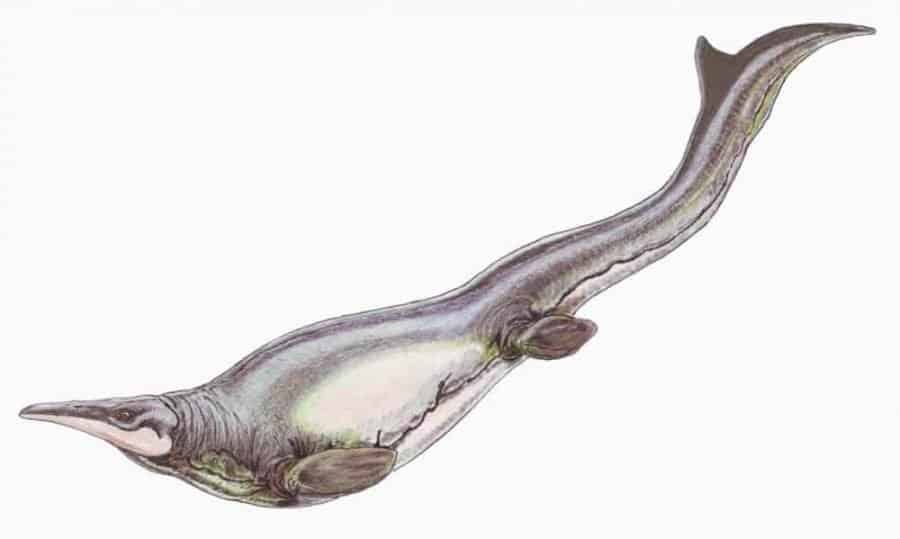 Now, new research suggests that mosasaurs had yet another potent advantage: a muscular breast stroke that may have added ambush-worthy bursts of speed.

“We know that mosasaurs most likely used their tails for locomotion. Now we think that they also used their forelimbs, or their tail and forelimbs together,” explains lead author Kiersten Formoso, a Ph.D. student in vertebrate paleontology at the University of Southern California. That dual swimming style, she says, could make mosasaurs unique among tetrapods (four limbed creatures), living or extinct.

Previous studies noted that mosasaurs had an unusually large pectoral girdle–the suite of bones that support the forelimbs. But most assumed the creature’s swimming was mainly driven by their long tails, something like alligators or whales. That smooth, long distance-adapted swimming style is called “cruising,” as opposed to “burst” motion. “Like anything that swims or flies, the laws of fluid dynamics mean that burst versus cruising is a tradeoff,” explains co-author Mike Habib, Assistant Professor of Anatomical Sciences at USC. “Not many animals are good at both.”

To dive in more closely on whether mosasaurs were burst-adapted, cruise-adapted, or an unusual balance of both, Formoso and co-authors focused on the oversized pectoral girdle. They studied a fossil Plotosaurus, a type of mosasaur, at the Natural History Museum of Los Angeles County. In addition, they used measurements of mosasaur pectoral girdles published in other studies.

They determined that the mosasaurs’ unusually large and low-placed pectoral girdle supported large muscle attachments. In addition, says Habib, asymmetry in the bone structure is a telltale sign of the strong, inward pull-down motion called adduction. These analyses suggest that mosasaurs used their forelimbs to swim, breast-stroke style, adding powerful bursts of propulsion to their ability to cruise.

The team continues to model bone structure, morphology, measurements, and fluid dynamics such as drag to learn exactly how, and how fast, these sea monsters swam. Along with applications to biomechanics, and even robotics, say Formoso and Habib, the study also sheds light on how evolution and ecosystems are affected by fluid dynamics.

Formoso points out that it’s a challenge to study kinematics on extinct animals, considering that the subjects are missing flesh, skin, and many bones. But one thing is nearly certain, she says. “Mosasaurs swam unlike anything else.”