The psychiatry field has long sought answers to explain why antidepressants help only some people.

Is a patient’s recovery due merely to a placebo effect – the self-fulfilling belief that a treatment will work – or can the biology of the person influence the outcome?

Two studies led by UT Southwestern provide evidence for the impact of biology by using artificial intelligence to identify patterns of brain activity that make people less responsive to certain antidepressants. Put simply, scientists showed they can use imaging of a patient’s brain to decide whether a medication is likely to be effective.

The studies include the latest findings from a large national trial (EMBARC) intended to establish biology-based, objective strategies to remedy mood disorders and minimize the trial and error of prescribing treatments. If successful, scientists envision using a battery of tests such as brain imaging and blood analyses to increase the odds of finding the right treatment.

“We need to end the guessing game and find objective measures for prescribing interventions that will work,” said Dr. Madhukar Trivedi, who oversees EMBARC and is founding Director of UT Southwestern’s Center for Depression Research and Clinical Care. “People with depression already suffer from hopelessness, and the problem can become worse if they take a medication that is ineffective.”

The studies – which each included more than 300 participants – used imaging to examine brain activity in both a resting state and during the processing of emotions. Both studies divided the participants into a healthy control group and people with depression who either received antidepressants or placebo.

Of the participants who received medication, researchers found correlations between how the brain is wired and whether a participant was likely to improve within two months of taking an antidepressant.

Dr. Trivedi said imaging the brain’s activity in various states was important to get a more accurate picture of how depression manifests in a particular patient. For some people, he said, the more relevant data will come from their brains’ resting state, while in others the emotional processing will be a critical component and a better predictor for whether an antidepressant will work.

“Depression is a complex disease that affects people in different ways,” he said. “Much like technology can identify us through fingerprints and facial scans, these studies show we can use imaging to identify specific signatures of depression in people.”

Data from both studies derive from the 16-week EMBARC trial, which Dr. Trivedi initiated in 2012 at four U.S. sites. The project evaluated patients with major depressive disorder through brain imaging and various DNA, blood, and other tests. His goal was to address a troubling finding from another study he led (STAR*D) that found up to two-thirds of patients do not adequately respond to their first antidepressant.

EMBARC’s first study, published in 2018, focused on how electrical activity in the brain can indicate whether a patient is likely to benefit from an SSRI (selective serotonin reuptake inhibitor), the most common class of antidepressant.

The Nature research used artificial intelligence to determine correlations between the effectiveness of an antidepressant and how a patient’s brain processes emotional conflict.

Scientists examined the brain activity of study participants while they were presented with “emotional conflicts” – in this case photographs that offered sometimes conflicting messages.

Participants undergoing brain imaging were shown photographs in quick succession that offered sometimes conflicting messages such as an angry face with the word “happy,” or vice versa. Each participant was asked to read the word on the photograph before clicking to the next image.

However, rather than observe only neural regions believed to be relevant to predicting antidepressant benefits, scientists used machine learning to analyze activity in the entire brain. “Our hypotheses for where to look have not panned out, so we wanted to try something different,” Dr. Trivedi explained.

AI identified specific brain regions – for example in the lateral prefrontal cortices – that were most important in predicting whether participants would benefit from an SSRI. The results showed that participants who had abnormal neural responses during emotional conflict were less likely to improve within eight weeks of starting the medication. 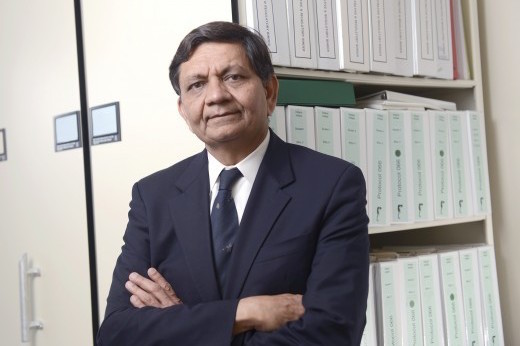 Dr. Trivedi has initiated other large research projects to further understand the underpinnings of mood disorders, among them D2K, a study that will enroll 2,500 patients with depression and bipolar disorders and follow them for 20 years. In addition, RAD is a 10-year study of 2,500 participants (ages 10-24) that will uncover factors for reducing the risk of developing mood or anxiety disorders.

Utilizing some of these enrollees, Dr. Trivedi’s research team will study the results from several other tests to augment brain imaging and more accurately assess patients’ biological signatures to determine the most effective treatment. Dr. Trivedi has had preliminary success developing a blood test but acknowledges it may only benefit patients with a specific type of inflammation.

Combining blood and brain tests, he said, will improve the chances of choosing the right treatment the first time.

“We need to look at this issue in several ways to identify the many different signatures of depression in the body,” he said. “The findings from these new studies are significant and bring us closer to using them clinically to improve outcomes for millions of people.”