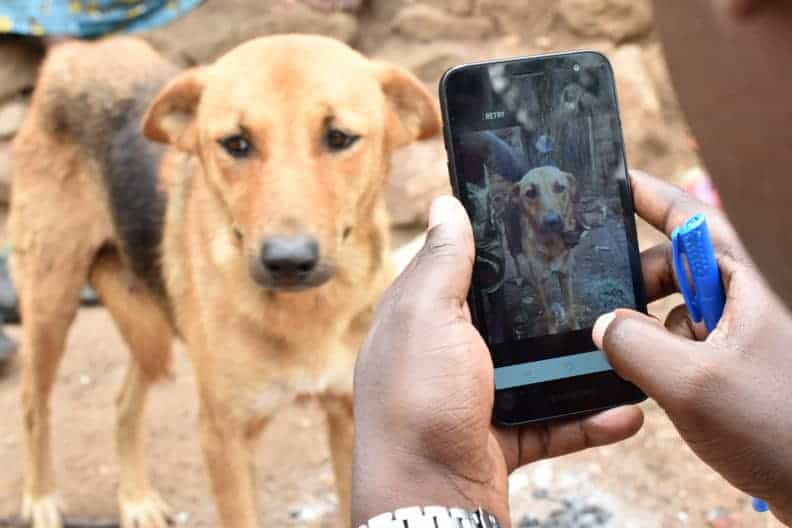 Researchers in Tanzania can now determine if a dog was vaccinated for the rabies virus with a cellphone camera image.

The research team, based out of Washington State University’s Paul G. Allen School for Global Animal Health, is working with PiP My Pet, a company that developed a mobile application that uses facial recognition to reunite lost pets with their owners.

The only twist; rather than locate the lost, the company designed a new app to track which dogs were vaccinated for the rabies virus, and more importantly, which dogs still require the vaccine.

The app is currently being rolled out in a series of field trials as part of the National Institute of Health’s vaccination trial in the Mara region of Tanzania.  The trial, which will provide the first mass dog vaccination against rabies in the region, began this year and is aiming to test the efficacy of two delivery strategies: the first, uses teams of vaccinators in vehicles to visit each village in turn, whilst the second uses village-based vaccinators to deliver mass vaccination of dogs.

“This technology means we don’t have to insert expensive microchips to identify each vaccinated dog,” explains Felix Lankester, director of WSU’s Rabies Free Tanzania program. “It saves us time and money, both very important commodities in our mission to eliminate human rabies in East Africa.”

Each microchip costs about $1 US, which quickly adds up when you consider WSU’s rabies elimination campaign vaccinated more than 275,000 dogs in 2019 in Kenya and Tanzania. The effort is now nearing 2 million vaccinations.

“People in the west are often surprised to hear that in East Africa rabies kills so many people each year, most of whom are children,” Lankester said. “Because we no longer need to insert microchips into dogs, this technology speeds up our process so we can vaccinate more dogs at a lower cost, and, in turn, prevent lives from being lost.”

Philip Rooyakkers, CEO of PiP My Pet, said it took about a year of addressing challenges before the app could be rolled out. One of the biggest being a way for the app to backup data in the field, miles from internet capability.

Rooyakkers stands by his product and its accuracy.

“Really early on we discovered that if we look at the current state of human facial recognition technology, you couldn’t use it for animals,” Rooyakkers said. “Human faces are oval, we know where the ears are, we know where the nose is, although someone may have glasses on, all that is relatively easy to overcome compared to dogs and cats whose faces vary so much in shape.”

Rooyakkers said to address those limitations, the technology provides images of the five most closely recognized dogs in the database and allows the vaccinator to narrow from there.

“We filter those by male and female, body scars, torn ears, other identifying markers and GPS data points that are stored as part of that file,” he said. “Combined with the facial recognition component all of this data make the technology very accurate.”

Rooyakkers said he chose to waive the app’s licensing fee for the Allen School.

“I do believe we have a moral obligation to help in this situation,” he said.

Lankester said the app’s geofencing tool also provides researchers the opportunity to compare vaccination rates and strategies in both arms of the Mara region trial, which could help determine strategies to use in the future.

“Not only could this technology improve the efficiency with which we roll out mass dog vaccination across Tanzania right now, it could tell us which vaccination strategies are most effective moving forward,” Lankester said. “That could be valuable information as we try to meet the World Health Organization’s goal to eliminate rabies by 2030.”