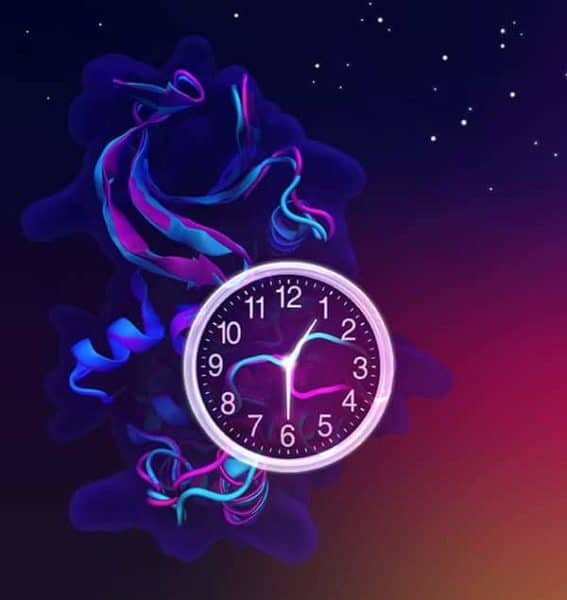 Scientists from UC San Diego, UC Santa Cruz and Duke University synchronized their research watches to study what makes our biological clocks tick. Specifically they set out to understand why some people are what they call extreme “morning larks” who operate on a shorter 20-hour cycle compared to a regular 24-hour pattern. This difference can result in outcomes like social jet lag—an inability to function in sync with the rest of society—and sleep disorders.

“Since circadian rhythms are important for almost every aspect of our physiology, when the biological clock is not properly aligned with Earth’s 24-hour day, it can cause a variety of problems ranging from social jet lag to metabolic and degenerative diseases,” explained UC San Diego’s Clarisse Ricci, a McCammon Group researcher who co-authored the research paper recently published in eLife.

In the new study, the researchers focused on mutations in an enzyme called casein kinase 1 (CK1), which regulates a core clock protein called PERIOD (PER). Clock-altering mutations in CK1 had been known for years, but it was unclear how they changed the timing of the clock.

“Many people with sleep phase disorders have changes in their clock proteins,” said Carrie Partch, associate professor of chemistry and biochemistry at UC Santa Cruz and a lead author of the paper, explaining that PER proteins are part of a complex feedback loop in which changes in their abundance set the timing of circadian rhythms, while mutations that increase the rate of PER degradation throw off the clock. “What we discovered is this neat molecular switch that controls the abundance of the PER proteins. When it’s working right, it generates a beautiful 24-hour oscillation.”

CK1 and other kinase enzymes carry out a reaction called phosphorylation, adding a phosphate to another protein. It turns out that CK1 can phosphorylate either of two sites on the PER protein. Modifying one site stabilizes PER, while the other modification triggers its degradation. The researchers showed how mutations in either CK1 or PER itself can alter the balance, favoring degradation over stabilization.

Partch’s lab performed structural and biochemical analyses of the CK1 and PER proteins that suggested how the switch works. To confirm that the interactions observed in the test tube matched the behavior of the proteins in living cells, they worked with researchers at the Duke-National University of Singapore Medical School. The simulations performed at UC San Diego showed the molecular dynamics of the switch, demonstrating how the CK1 protein alternates between two conformations, and how mutations cause it to favor one conformation over another.

The switch involves a section of the CK1 protein called the activation loop. One conformation of this loop favors binding of CK1 to the “degron” region of PER, where phosphorylation leads to the protein’s degradation. The clock-changing mutations in CK1 cause it to favor this degron-binding conformation.

The other conformation favors binding to a site on the PER protein known as the FASP region, because mutations in this region lead to an inherited sleep disorder called Familial Advanced Sleep Phase Syndrome. The stabilization of PER can be disrupted by either the FASP mutations, which interfere with the binding of CK1 to this region, or by the mutations in CK1 that favor the alternate conformation of the activation loop.

The new findings also suggest why binding of CK1 to the FASP region stabilizes PER. With phosphorylation of the FASP region, it then acts to bind and inhibit CK1, preventing it from adopting the other conformation and phosphorylating the degron region.

“It binds and locks the kinase down, so it’s like a pause button that prevents the PERIOD protein from being degraded too soon,” Partch said. “This stabilizing region builds a delay into the clock to make it align with Earth’s 24-hour day.”

According to Ricci, researchers have been showing that a healthy and robust clock can delay the onset of degenerative diseases and revert metabolic conditions such as diabetes and obesity.

“Understanding circadian proteins at the molecular level can enable scientists to develop innovative therapies for fixing clock dysfunctions caused by inherited conditions, modern habits, shift working or aging,” said Ricci. “The conformational switch mechanism and the molecular details revealed by our work could help in the development of drugs targeting the kinase component of the clock.”

CK1 is also interesting because it seems to be the most ancient component of biological clocks. The whole feedback loop involving CK1, PER and other core clock proteins is found in all animals from insects to humans. CK1, however, is also found in every other organism with eukaryotic (nonbacterial) cells, including single-celled green algae in which it has been implicated in circadian rhythms.

“Our results provide a mechanistic foundation to understand the essentially universal role of CK1 as a regulator of eukaryotic circadian clocks,” Partch said.

Clockwork Computations behind the Simulations

The CK1 research collaborators at UC San Diego used the Triton Shared Computing Cluster (TSCC) at the San Diego Supercomputer Center (SDSC) on campus to create molecular dynamics (MD) simulations showing how the CK1 protein switches between two conformations, and how mutations cause it to favor one conformation over another.

Since its launch in 2013—and with the McCammon Group as an early member—TSCC has grown to 34 participating labs/groups with almost 300 researcher-owned compute nodes, plus an additional 75 common nodes available to anyone on campus through a pay-as-you-go recharge model.

“TSCC allowed me to run a set of 30 independent Gaussian accelerated MD simulations (five replicas for each system), in parallel, in a timeframe of about one month,” said Clarisse Gravina Ricci, a postdoctoral scholar with UC San Diego’s Department of Pharmacology. “This provided me with a total simulated time of 1.5 microseconds. Robust sampling is a very important aspect of MD-based studies, and this amount of sampling gave me a lot of confidence in my results.”

Ricci used a special enhanced sampling MD method developed by Yinglong Miao while he was with the McCammon lab at the Howard Hughes Medical Institute and UC San Diego. This method, called Gaussian accelerated MD (GaMD), enhances the sampling by adding a boost potential that facilitates transitions between energy minima over high transition barriers.

“The combination of the GaMD method with a good amount of computation time on TSCC provided me with consistent results,” said Ricci.

This first collaboration gave rise to other structural questions in the field of circadian biology that could be tackled by MD simulations and related computational methods, according to Ricci.

“As a next step, I’d like to focus on the allosteric communications in CK1, to identify the molecular pathways by which structural information travels between the regulatory anion binding pockets and the activation loop. In the long run, I’d like to perform virtual screening for ligands that could bind to some of these regulatory pockets and control the activity of CK1 towards PER. This could lead to new therapies to ‘fix’ disrupted clocks,” Ricci said.