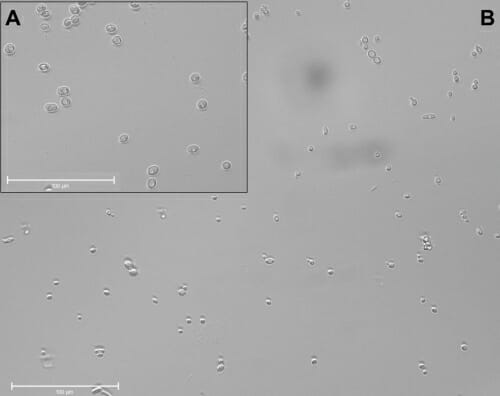 Researchers at the Great Lakes Bioenergy Research Center at the University of Wisconsin–Madison have developed a method to combine traits from up to six different yeast species in a single hybrid strain — a yeast that could carry more tools for a specific job, such as producing biofuels.

“This technology that we developed is a way to try to combine the best traits of different species when you don’t know exactly where these are encoded in the genome,” says researcher David Peris, who led the work as a postdoctoral fellow at UW–Madison and a Marie Sklodowska Curie fellow at the Institute of Agrochemistry and Food Technology-CSIC in Spain.

The idea, he says, is to combine as many genomes as possible to maximize the amount of genetic starting material in which to look for promising characteristics. Then the researchers can expose the resulting gene-rich hybrids to various conditions in the laboratory to identify strains that express a desired trait, such as the ability to grow at cold temperatures or to digest plant sugars.

“It’s very common to cross different organisms with desirable properties,” such as different varieties of corn or breeds of dogs, says senior author Chris Hittinger, a UW–Madison genetics professor. “What’s different here is that we’re crossing things that are different species, and are quite distinct genetically.”

“It really was to see how far we could push the yeast mating system to create as complex of hybrids as possible,” Hittinger says.

Hittinger sees many potential research and industrial uses for such hybrids, including studies in genetics, cancer biology, brewing and bioenergy.

But the team used an enzyme that can change one mating-type gene into the other. By changing some a-type cells into alpha-type, the team was able to make crosses that create a mating-ready cell that has two complete sets of chromosomes. Two of these diploid cells from different species could then be mated to create a two-species hybrid with four sets of chromosomes.

“Basically, we were hacking the biological system for facilitating crosses of diploids,” Peris explains.

In the new study, the researchers described a way to iterate the method to create even more complex hybrids. So far, they’ve been able to combine the genomes of six yeast species into a single cell. The work was published April 29 in Nature Communications.

“One of the reasons this works is there’s no chromosome counting mechanism in the cell,” Hittinger says. “All it’s doing is looking at whether ‘a’ and ‘alpha’ are both present or not. Even if it has six copies of “a,” say you could find another cell that has six copies of “alpha,” then they’ll mate.”

He isn’t sure if it will be possible to push beyond six species, noting that cell size and chromosome instability both increase with more genomes.

Combining the method with gene editing tools, such as the CRISPR-Cas9 system, opens the door to creating complex hybrid yeasts with specific sets of desired traits. Hittinger sees many potential research and industrial uses for such hybrids, including studies in genetics, cancer biology, brewing and bioenergy. The Wisconsin Alumni Research Foundation has filed a patent on the new process.

The team is currently working to produce a hybrid yeast with multiple traits to improve the ability to turn plant material into advanced biofuels, such as isobutanol. One parent yeast is a GLBRC-designed strain engineered with genes that enable it to consume xylose, a sugar found in high levels in biomass but which cannot easily be used by most Saccharomyces strains. But the process of pretreating plant material to prepare it for fermentation can produce toxins that many yeast strains cannot tolerate. With iHyPr, the researchers crossed the xylose-consuming strain with others that are able to grow better under the pretreatment conditions, as well as a strain that can produce high levels of isobutanol.

“Through laboratory evolution, we were able to push complex hybrids in the direction we wanted to go for industrially relevant traits,” Hittinger says. “This is a new technique for synthetic biology for combining genomes. It’s an exciting development that I think researchers could take in a lot of directions.”

Additional researchers on the study include current and former Hittinger lab researchers William G. Alexander, who made the first three-species hybrid with the technology; Ryan V. Moriarty, who created the first six-species hybrid; and Russell L. Wrobel, who developed most of the iHyPr parameters and crossing schemes.